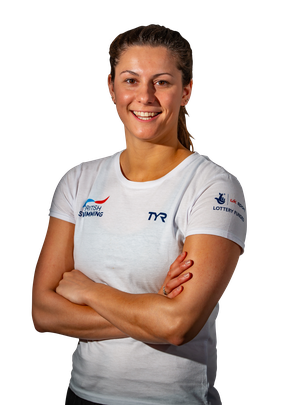 Aimee Willmott built on her first Commonwealth Games title in 2018 by appearing at the third World Championships of her career a year later in Gwangju.

The Glasgow 2018 European Championships brought a duo of seventh-place finishes for the Stirling-based swimmer in both the medley events.

That followed on from Willmott winning her first senior international title, as she claimed Commonwealth Games gold in the 400m Individual Medley event for Team England.

At the 2017 British Swimming Championships, the two-time Olympian took silver in the 400m IM to secure her place on the team for the World Championships in Budapest, only to have to withdraw through injury.

The previous year, Willmott reached the final of the Rio 2016 Olympic 400m Individual Medley event, as well as finishing in the top 20 of the 200m event.

She had another consistent year in 2015, making the World Championship final for the 400m Individual Medley after claiming three medals at the British Championships in London four months previous.

In 2014, Willmott notched her maiden international accolades at both European and Commonwealth level.

She completed her first World Championship campaign in 2013, finishing ninth in the 400m Individual Medley.

The start of the decade in 2010 saw Aimee make the final of both medley events and the 800m Freestyle at the Delhi Commonwealth Games, as well as notching a couple of top-12 medley finishes at the European Championships in Budapest.

Aimee in the news