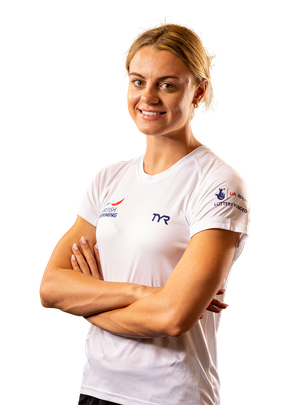 Alicia Wilson is preparing for her maiden Olympic Games after securing a place on Team GB at the British Swimming Selection Trials in April 2021 with an eye-catching 200m Individual Medley performance.

Guildford City's Wilson competes across backstroke and medley events - and it was in the Women's 200m Individual Medley final at the London Aquatics Centre that she showed her class to ensure she will be heading to Tokyo.

Pushing the impressive Abbie Wood all the way, Wilson led after the backstroke leg and smashed her personal best to go inside the 2:11.10 consideration time by narrowly touching second.

The Team GB call-up was followed quickly by her first senior British appearance on the international stage, at the 2021 European Championships in Budapest.

Two years earlier, Wilson clinched gold in the 200m IM at the World University Games in Naples. Back in 2017, she made it on to the podium at the European Junior Championships after claiming bronze in the 200m IM.