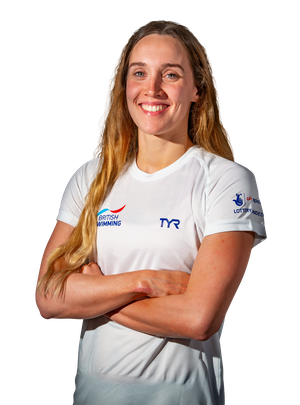 Alys Thomas appeared in her second World Championships in 2019 after claiming her first European and Commonwealth medals the previous year.

Thomas - who won double British gold across the 100m and 200m Butterfly earlier in 2019 - reached a maiden individual Worlds final in Gwangju, finishing fifth in the 200m Butterfly, as well as helping the Women's 4x100m Medley Relay team place eighth in that event.

The Glasgow 2018 European Championships saw the City of Swansea Aquatics athlete serve up a duo of bronze medals, in her solo specialism of 200m Butterfly and the 4x100m Medley Relay.

Three months before that, Thomas delivered an impressive swim to claim her first international title for Wales in the 200m Butterfly at the Gold Coast Commonwealth Games. She also picked up a bronze in the Women's 4x100m Medley Relay in the penultimate race of the swimming competition.

At the 2017 World Championships in Budapest, she competed in both the 100m and 200m Butterfly events, reaching the semi-finals in both, while also helping the 4x100m Medley Relay team to another final.

That followed an impressive display in that year's British Championships, where she earned a medal of each colour, topping the podium for a second successive year in the 100m Butterfly, claiming silver in the 200m and taking bronze in the 50m.

Thomas' 2016 campaign brought that debut British title in Glasgow as she claimed the 100m Butterfly gold and followed that up with silver in the 200m event.

Back in 2014, she represented Wales at the Commonwealth Games in Glasgow on her senior international debut, narrowly missing out on a medal by finishing fourth in the 200m Butterfly, as well as ninth in the 100m event.

Alys in the news