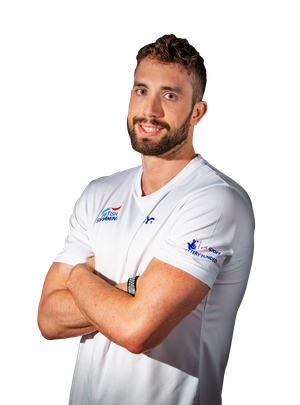 Calum Jarvis first represented Great Britain in 2012 and went on to win silver at the 2014 Commonwealth Games, before forming part of successive 4x200m Freestyle Relay victories at World Championships in 2015 and 2017.

Jarvis' most recent Worlds outing came in that event at Gwangju 2019, when the British team finished fifth in the final.

Before that, he had followed up the back-to-back Worlds triumphs by being a part of the title-winning 4x200m Freestyle Relay quartet at the Glasgow 2018 European Championships.

His best individual result there came in the Men's 200m Freestyle, when he posted a time fast enough to progress through the semi-finals - but due to the two per nation rule, Jarvis was unable to go through. He was a finalist in that event in the Commonwealth Games earlier in 2018, as well as in the 100m Butterfly.

At the 2017 World Championships in Budapest, Jarvis helped the Men's 4x200m Freestyle Relay team qualify for the final, from where they went on to claim one of Britain's four gold medals at the competition.

The National Centre Bath athlete previously made a telling impact at his first World Championships in 2015 by helping the British quartet to the first of those back-to-back gold medals in the 4x200m Freestyle Relay, swimming in the final this time around. In that same year, Jarvis also claimed his second career British title in the 100m Freestyle at the London Aquatics Centre.

He qualified for his debut Commonwealth Games at the 2014 British Championships in Glasgow, impressing to set a Welsh record for fourth in the 100m Freestyle and winning his second British medal with silver over 200m Freestyle. He sprung a surprise to land 200m Freestyle bronze at Glasgow 2014, breaking David Davies' Welsh record in the final to seal his first senior international medal.

Following a debut senior international appearance for Great Britain at the 2012 European Short Course Championships in Chartres, more finals spots were secured at the 2013 edition of the British Championships, finishing sixth over 200m Freestyle and fifth over 200m Backstroke.

At the London 2012 Olympic Trials at the Aquatics Centre, Jarvis landed his first British title, setting a personal best for gold in the 200m Backstroke but narrowly missing the qualification time to swim at the Olympics.

Calum in the news