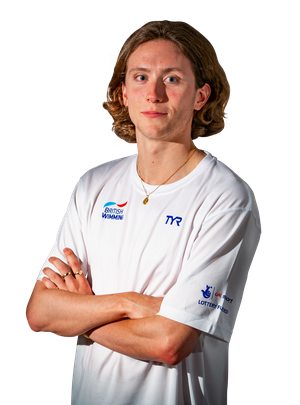 Cameron Kurle made his Olympic debut at Rio 2016 aged just 19 - and he has since gone on to secure senior medals on European and Commonwealth Games stages.

Kurle's 2019 brought fifth and eighth-placed finishes in the 200m and 400m Freestyle events respectively at the British Championships, a year on from relay successes in Glasgow and on the Gold Coast.

He secured a nod from Team England to head Down Under in the early part of 2018 to represent Team England at his first Commonwealth Games on the Gold Coast. The National Centre Bath athlete returned a silver medallist for his part in the Men's 4x200m Freestyle Relay, as well as notching a top-15 finish in the individual 200m event.

Later in the year, Kurle went one better than the Commonwealth silver by helping Britain's Men's 4x200m Freestyle Relay team to gold at the European Championships in Glasgow, before collecting a bronze from the Mixed version of the event later in the week.

A surprise call-up to Team GB for Rio 2016 saw Kurle compete in the Men's 200m Freestyle at the Olympic Games, an opportunity that helped him gain valuable race and competition environment experience on the biggest sporting stage of them all.

In 2015, he was selected for the inaugural European Games held in Baku. He came away from that event with gold in the 4x100m Freestyle Relay and an individual silver medal in the 200m Freestyle.

Kurle was also part of the British team taken to the World Junior Championships in Singapore later that year, securing finals in both the 200m and 400m Freestyle.

Cameron in the news