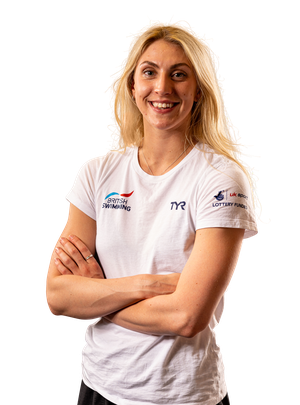 Cassie Wild will compete at her maiden Olympic Games in Tokyo in the summer of 2021 after eye-catching displays at the British Swimming Selection Trials and European Championships earlier in the year.

The former World Junior Championships finalist was selected for Team GB after finishing second - behind University of Stirling teammate Kathleen Dawson - in both the Women's 100m and 200m Backstroke finals in London, dipping under the Olympic consideration times in the process.

Cassie's preparations for Tokyo continued with another show of moving things in the right direction, claiming a brilliant 200m Backstroke silver at the Europeans in Budapest - with a massive new personal best - as well as part in the gold-medal winning effort by the Women's 4x100m Medley Relay team. She also placed fourth and fifth respectively in the 50m and 100m Backstroke finals.

Wild - who trained with Ellesmere College Titans - competed at her first Commonwealth Games in the spring of 2018 for Scotland and reached the final of the 50m Backstroke where she finished fifth overall. That was before her maiden senior outing on a British team, at the 2018 European Championships in Glasgow.

The previous season, Wild was part of the British team that attended the Indianapolis at the FINA World Swimming Championships where she competed in the 50m and 100m Backstroke and finished sixth and seventh respectively.

Cassie in the news