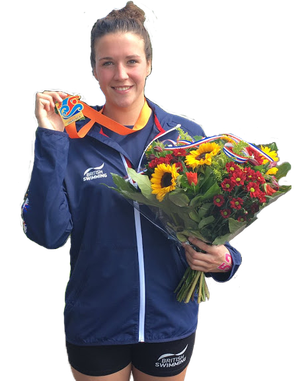 Danielle Huskisson is a former European champion and one of Britain's most experienced marathon swimmers after competing in her fourth World Championships at Gwangju 2019.

Huskisson was part of the British team that placed 11th in the Mixed 5km Open Water race of her most recent Worlds appearance, while she secured a top-25 finish in the Women's 10km Open Water event.

The previous year, the University of Stirling athlete came close to a medal at the European Championships with a fourth-placed finish in the Team Event. Individually, she placed 15th in the Women's 10km race.

Huskisson's 2017 Worlds appearance in Kazan saw her compete in the 10km and achieve a top-15 finish, while the Mixed Relay team - with which she was again involved - finished fifth overall. Earlier in the year, she claimed gold in the 1500m Freestyle at the British Championships.

Her maiden continental title came in 2016, when Huskisson became European champion in the Women's 5km event in Hoorn

Huskisson trains under the guidance of coaches Ben Higson and Steven Tigg at the Scottish Swimming Academy in Stirling, working alongside fellow British swimmers Duncan Scott and Ross Murdoch.