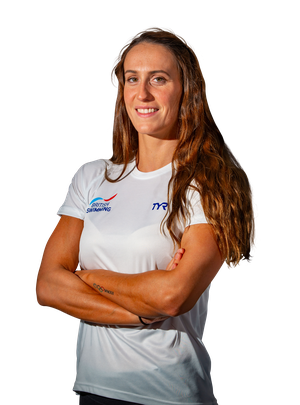 Georgia Davies' first World Championships medal arrived in 2019 as she continues to compete across every level of the sport, including two Olympic Games and three Worlds events.

Davies swam the backstroke leg as the British team claimed bronze in the Mixed 4x100m Medley Relay in Gwangju in July 2019, a Championships at which she just missed out on an individual podium place, finishing fourth in the 50m Backstroke.

She claimed a quartet of medals at the Glasgow 2018 European Championships - two gold, a silver and a bronze.

The 2018 Commonwealth Games were a third time representing Team Wales and Davies returned from Australia a double bronze medallist. She finished third in the 50m Backstroke and completed the backstroke leg of the Women's 4x100m Medley Relay to help Wales to another third-place finish.

Davies impressed at the 2017 British Swimming Championships as she won two golds in the 50m and 100m Backstroke and lowered her personal best on the way to securing her position on the World Championships team. In Budapest, she reached the final of the 50m Backstroke.

It was a 10th-placed finish for Davies in the Women's 100m Backstroke after she reached the semi-finals at the 2016 Olympic Games in Rio.  Georgia was also part of the British quartet that finished seventh in the final of the Women's 4x100m Medley Relay.  She set a new personal best on her 100m Backstroke leg of the relay.

Davies featured in both gold medal-winning Women's and Mixed 4x100m Medley relay quartets at the UK-held European Championships that year.  She also secured individual bronze in the Women's 50m Backstroke.

At the 2014 Commonwealth Games in Glasgow, she won gold in the 50m and silver in the 100m Backstroke in what would prove a medal-laden year.

The London-born sprinter claimed 50m silver as well as bronze medals in the 100m and 4x100m Medley Relay on her European Championship debut in Berlin later that year.

Her senior breakthrough came as part of the Wales team at the 2010 Commonwealth Games, where she landed 50m Backstroke bronze, before finishing 15th in the 100m discipline at London 2012, on her Olympic bow.

Georgia in the news

END_OF_DOCUMENT_TOKEN_TO_BE_REPLACED

Got a question for Georgia?