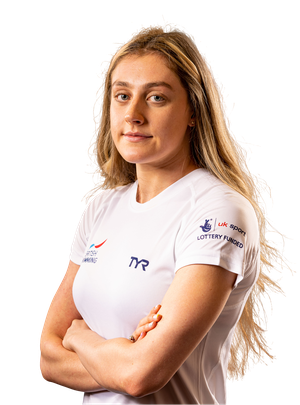 Harriet Jones secured a place on her first British team in style in April 2021 by flying to success at the British Swimming Selection Trials and earning a spot on Team GB for the Tokyo Olympic Games.

Jones - who trains under Graham Wardell at the City of Cardiff Swimming Club - had previously competed for Wales at the 2018 Commonwealth Games on Australia's Gold Coast, competing in the 100m and 200m Butterfly events.

It was at the Selection Trials in London earlier this year, though, that she put in arguably her biggest performance to date, dipping under the Tokyo consideration time in the 100m Butterfly to clinch her ticket to the Games. That swim also saw her win the event in one of the standout displays of the meet.

A month later, she was part of the 40-strong British team at the European Championships in Budapest, becoming a double European champion at the first time of asking as she helped the Women's and Mixed 4x100m Medley Relay teams take gold at the Duna Arena.

Harriet in the news