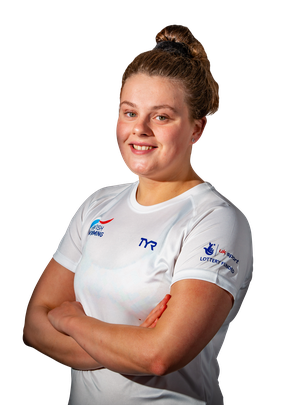 Holly Hibbott followed up a trio of European Championship medals in 2018 with her second appearance at a World Championships the following year.

Hibbott recorded 10th and 16th-place finishes in the Women's 400m Freestyle and 200m Freestyle respectively in Gwangju, with the former event having brought a bronze European medal for her in 2018.

She was edged off the podium in the 800m Freestyle, where she finished fourth, while she was fifth at the close of the 200m Freestyle event.

Hibbott's first World Championships came in 2017 in Budapest. She reached the final of the 800m Freestyle event and ended the 400m Freestyle contest in 15th.

The previous year saw an outing to the European Juniors in Hungary, where Hibbott won three medals, including a solo silver in the 400m Freestyle.

She represented Team GB over in Baku, Azerbaijan at the inaugural European Games in 2015, where she won gold in the 800m Freestyle and also picked up relay bronze in the Women's 4x200m Freestyle.

Her first outing at a continental junior championships came in 2014 in Dordrecht, the Netherlands,  where she won silver in the Women's 800m Freestyle.

Holly in the news