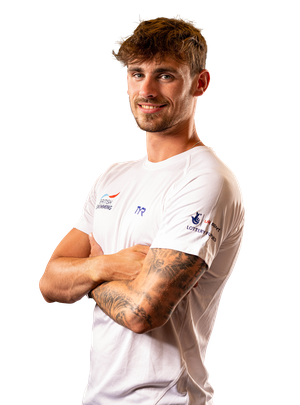 Jacob Peters has been selected for a GB team at each of the senior major meets as he prepares for his World Championship debut at Budapest 2022, following back-to-back European appearances - including winning gold in the Men's 4x100m Medley Relay in 2018 - and his Olympic bow at Tokyo 2020.

The 2022 British Swimming Championships saw a solid set of performances from Jacob, with the Bath Performance Centre swimmer collecting silver medals in the 50m and 100m Butterfly. With both times being close to or better than his personal best, he will be looking to move things on again at the World Championships in Budapest.

Peters’ sole swim at the Tokyo 2020 Olympic Games came in the 100m Butterfly, with the Brit just missing out on the semi-finals in his maiden Olympic outing.

Peters - who trains under coach Jol Finck - swam strongly at the British Swimming Selection Trials to go under the Games consideration time in the Men's 100m Butterfly, finishing second behind James Guy and earning a place on the plane to Tokyo in the process.

Ahead of the Games, the Poole-born athlete was part of a 40-strong British team at the European Championships in Budapest, where he competed in both the 50m and 100m Butterfly events, three years on from becoming a European champion as part of the Men's 4x100m Medley Relay team in Glasgow.

He made his Commonwealth Games debut in Australia earlier that year of 2018 as a supporting part of the English silver medal-winning relay quartet in the 4x100m Medley on the final night of racing. He also competed in three individual events, the 50m, 100m and 200m Butterfly and reached the final of each.

He gained more international competition experience at his first European Championships in Glasgow, where he competed in all three of the butterfly events. He also picked up gold for his part in the successful defence of Britain's 4x100m Medley Relay title.

Earlier in 2018, he picked up a British Championship bronze in the 100m Butterfly in Edinburgh, accompanied by a fifth and ninth place finish in the 50m and 200m Butterfly respectively.

He got his first taste of international competition at the FINA World Junior Championships in 2017 and managed a seventh-place finish in the 200m Butterfly over in Indianapolis.

Jacob in the news