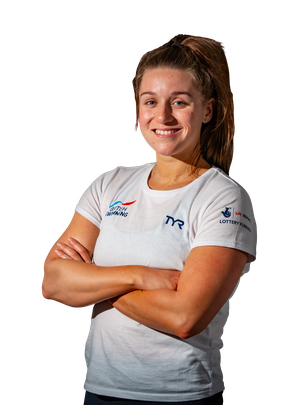 Jessica Fullalove made her World Championships bow in 2019 after her second Commonwealth Games appearance the year before.

In Gwangju, the Bath-based swimmer made the semi-finals of the Women's 100m Backstroke, as well as contesting the 200m event.

Fullalove kick-started her 2018 season with a second appearance for Team England at the Commonwealths on Australia's Gold Coast. She reached the final of the 200m Backstroke, finishing seventh overall, and narrowly missed out on a medal in the Women's 4x100m Medley Relay team that finished fourth on the final night of floodlit racing.

She was also selected to make her debut on a senior British team at the European Championships later that year, only for a hand injury to force her out of competition.

Fullalove's 2017 included two visits to the British Championship podium with a silver in the 200m Backstroke and bronze in the 100m Backstroke, the same result as the previous year.

Glasgow 2014 was her first Commonwealth Games for Team England after winning gold in her preferred 200m Backstroke at the British Championships. She finished inside the top 12 for each of the 50m, 100m and 200m Backstroke events.

In 2013, she represented Great Britain at the FINA Junior World Championships in Dubai, where she won silver in the 4x100m Medley and bronze in her individual 100m Backstroke outing.

Jessica in the news