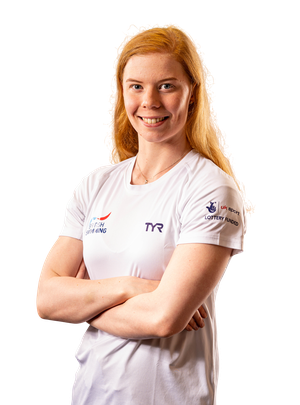 Laura Stephens has become an established butterfly specialist on the British team in recent years, with 2021 bringing her Olympic debut in Tokyo and a maiden senior international medal, and 2022 continuing her success with the athlete making more trips to the podium.

Stephens was involved in all three senior international competitions over the summer of 2022. Her first outing at the World Aquatics Championships in Budapest - her highest finish of tenth place coming in the 200m Butterfly. She then turned her attention to the Commonwealth Games in Birmingham, as she joined Team England to add two medals to their tally; a bronze in the 4x100m Medley Relay, before a sensational individual performance in the 200m Butterfly to see her take silver. The European Aquatics Championships in Rome was the final stop of the summer for the athlete, with her fourth place finish in the 200m Butterfly her only outing of the competition.

Laura put in two brilliant performances at the 2022 British Swimming Championships to claim gold in both the 100m and 200m Butterfly in closely contested finals at Ponds Forge.

At the Tokyo Olympics, Stephens swam the 200m Butterfly, finishing just outside the final spots in a very respectable 10th place in what was her debut at such an event.

The former Plymouth Leander swimmer - who moved to the British Swimming Performance Centre, Loughborough after Tokyo 2020 - powered under the Olympic consideration time in the Women's 200m Butterfly at June's British Swimming Glasgow Meet to book her place on the plane to Tokyo, a month after earning her first European title as part of the victorious Women's 4x100m Medley Relay team in Budapest.

A year earlier the London-born swimmer produced a lifetime best time to qualify for her debut senior international outing,  representing Team England at the Commonwealth Games on the Gold Coast; the Plymouth-based swimmer again made the final in her main event, before helping her nation to fourth in the Women's 4 x 100m Medley Relay.

Laura in the news