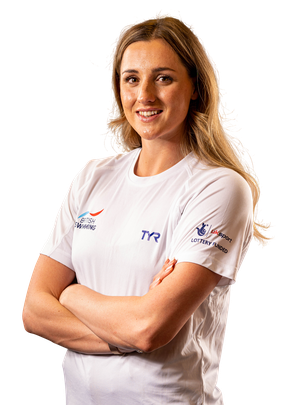 Molly Renshaw is one of the senior figures in the British Swimming team, having represented Great Britain at all levels of international swimming, including two Olympic Games and five World Championships - earning her first individual European title in 2021.

The first of her two senior international appearances in 2022 came at the World Aquatics Championships in Budapest, where she made the final in both the 100m and 200m Breaststroke events; finishing in eighth and sixth place respectively. Her summer finished at the 2022 Commonwealth Games in Birmingham, with the athlete claiming two fourth placed finishes in the same events, as well as a bronze medal in the 4x100m Medley Relay with Team England.

Molly missed out on a podium place by only a couple of seconds in the 200m Breaststroke at the Tokyo Olympics, with a consistent set of performances taking her all the way to the final. Finishing in an impressive sixth place, the Loughborough swimmer put in a solid swim amongst a strong field.

Renshaw had already earned selection to her second Olympic team after smashing the British record in the Women's 200m Breaststroke at April's British Swimming Selection Trials. She followed that by producing a brilliantly measured swim to claim the gold in the same event at the European Championships in Budapest, before helping the Women's 4x100m Medley Relay team to gold on the final day of the meet.

In her most recent Worlds appearance in Gwangju in 2019, Renshaw reached three finals, in the Women's 100m Breaststroke, 200m Breaststroke and 4x100m Medley Relay events.

The summer of 2018 saw Renshaw collect a bronze medal in the 200m Breaststroke at the European Championships in Glasgow.

Earlier that year, at her second Commonwealth Games on the Gold Coast for Team England, the National Centre Loughborough athlete claimed silver in that same event, as well as recording top-15 finishes in the 50m and 100m Breaststroke categories.

She secured herself a place in the Team GB swimming squad for her debut Olympics in Rio in 2016, before progressing comfortably through the rounds of the 200m Breaststroke - and setting a new British record in the semi-final - to reach the showpiece, in which she ranked sixth overall.

The 2016 European Championships in London saw Renshaw claim her first continental title, as she helped Britain's Women's 4x100m Medley Relay team to gold. She would finish just outside of the individual medals with a fourth-place finish in the 200 Breaststroke, although it would prove perfect preparation for the Olympic swims a few months later.

Renshaw attended the World Championships in Kazan in 2015, competing in the 200m Breaststroke after taking the British title earlier in the year at the London Aquatics Centre.

Her maiden senior international medals came in a memorable 2014 season, which saw Renshaw claim 200m Breaststroke bronze on her Commonwealth Games debut for England, as well as a silver in the Women's 4x100m Medley Relay.

That performance was followed soon after by another silver, in the 200m Breaststroke final, on her European Championship bow in Berlin.

Renshaw's senior international debut came in Shanghai in the 2011 World Championships, when she competed in the 200m Breaststroke event.

Molly in the news