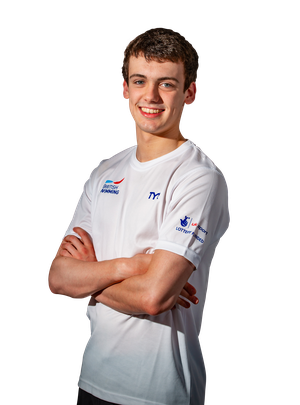 Nick Pyle followed up a breakout season and two European Championship relay titles in 2018 by making his senior World Championships debut in 2019 as he looks to make his mark on men's British Backstroke sprinting.

A silver in the 50m Backstroke and bronze in the 100m event at the British Championships saw Pyle qualify for the 2019 Worlds in Gwangju, where he made his senior bow at that level in the 50m heats.

That followed on from the University of Stirling swimmer's senior international debut the previous year, when he returned from the European Championships in Glasgow with two gold medals after playing a part in the Men's 4x100m Medley and Mixed 4x100m Medley Relays, as well as gaining experience in his individual backstroke events.

Earlier in 2018, Pyle stormed to a surprise victory in the 50m Backstroke at the British Championship, with finishes of sixth and fifth respectively in the 100m and 200m categories.

In 2017, Pyle competed out in Indianapolis for Great Britain at the FINA World Junior Championships, where he achieved a seventh-placed finish in the 50m Backstroke and came eighth in the 100m Backstroke.

Nick in the news