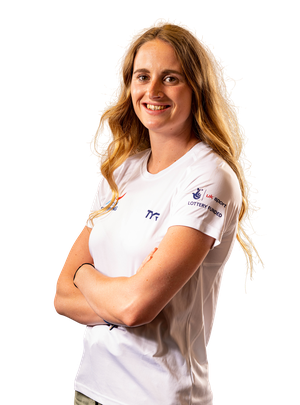 Sarah Vasey will complete the trio of major championship appearances for Britain when she competes at her first Olympic Games in Tokyo in the summer of 2021.

Vasey - who had previously confirmed her place in the upper echelons of British Swimming after reaching three finals at her debut World Championships at Budapest 2017 and following that up with a Commonwealth title in 2018 - went under the Tokyo consideration time in the Women's 100m Breaststroke at the British Swimming Selection Trials in April 2021 to earn a place on the Team GB roster.

She followed up that selection by appearing at her second European Championships, in Budapest, the month after, duly becoming a European champion for the first time after helping the Women's 4x100m Medley Relay team to gold. Vasey also missed out on an individual medal by 0.01 seconds in the 50m Breaststroke final, placing fourth - and she was sixth in the 100m showpiece.

The Gold Coast 2018 Commonwealth Games were the first call-up to Team England for Sarah, and she delivered by taking gold and the title in the Women's 50m Breaststroke. She was a finalist over the 100m event and formed part of the English quartet in the Women's 4x100m Medley Relay on the final night of racing that just missed out on a medal in fourth place.

In 2017, Vasey booked her seat on the plane to the World Championships - also in Budapest - after claiming her debut national title at the 2017 British Swimming Championships earlier in the year.

Towards the end of 2016, she made the move to British Swimming's National Centre Loughborough to join coach Mel Marshall after a  number of years working with her at the City of Derby.

The 2016 British Championships in Glasgow gave Vasey more medal success as she collected silver in the Women's 100m Breaststroke.

Her first British Championship medals came in 2015 when she won silver and bronze in the 100m Breaststroke and 50m Breaststroke respectively at the Olympic Aquatics Centre in London.

Sarah in the news