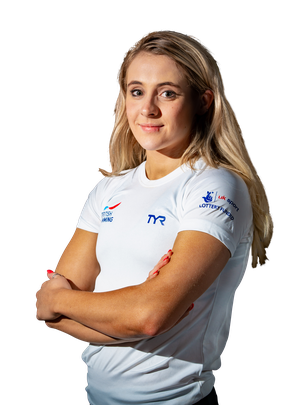 Siobhan-Marie O'Connor is one of Great Britain's most successful female swimmers, having won medals at every level of competition, including 200m Individual Medley silver at the 2016 Olympic Games in Rio.

O'Connor made the final of that same event at the 2019 World Championships in Gwangju - her fifth consecutive Worlds appearance - finishing seventh in the showpiece.

The Glasgow 2018 European Championships served up a busy schedule for the National Centre Loughborough athlete, who competed in four events and came away with a bronze medal as part of the Women's 4x100m Medley Relay. She came fourth and fifth in the 200m Individual Medley and 100m Breaststroke respectively, as well as helping the Women's 4x100m Freestyle Relay quartet finish fourth in their final.

At her second Commonwealth Games on the Gold Coast earlier that year, O'Connor successfully defended her 200m Individual Medley title for Team England, while also collecting two additional bronze medals in the Women's Freestyle relays over 100m and 200m.

The Women's 200m Individual Medley provided a seventh-place finish for O'Connor at the 2017 World Championships in Budapest. She also formed one part of the Mixed 4x100m Medley Relay team that finished fifth in a new European record time.

The Bath-born swimmer nearly caused one of the biggest upsets in the Rio 2016 pool as she delivered an outstanding swim in the Olympic 200m Individual Medley final, narrowly missing out on the title to Hungary's Katinka Hosszu and setting a new British record of 2:06.88 in the process as she clinched a memorable silver medal.

Two relay events at the Games saw O'Connor achieve a finals spot in the Women's 4x100m Medley Relay, and a ninth-place finish with the 4x200m Freestyle quartet.

Ahead of the Rio Games, she had won three medals at the European Championships in London - two relay golds and an individual silver in her favoured 200 IM event.

Four medals at the 2015 British Championships - including two golds in the 100m Freestyle and 200m Individual Medley - saw O’Connor qualify for her third World Championships in Kazan, Russia.

There, she was part of a history-making relay quartet, winning the inaugural mixed 4x100m Medley Relay in a world-record time that saw them crowned world champions. O’Connor also took home bronze in the 200m Individual Medley.

She booked her place as the youngest swimmer on the London 2012 Olympic team with 100m Breaststroke gold at the 2012 British ASA National Championships, going on to finish 21st in the 100m Breaststroke and eighth in the Women's 4x100m Medley Relay at the Olympic Games.

After encouraging performances at the European Junior Championship in 2010, O’Connor initially burst on to the scene in 2011, winning 200m Individual Medley gold at the ASA National Championships to secure a place at the World Championships in Shanghai - the first of five successive Worlds appearances for her.