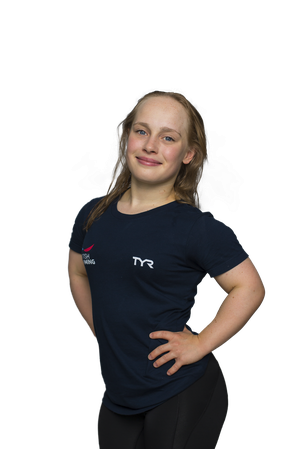 Ellie Robinson MBE became a Paralympic champion in her debut season on the international stage - and she has since won medals at World, European and Commonwealth level too.

Robinson's 2019 season saw her in World Para Swimming Championships action in London, where she picked up a silver medal in the S6 50m Butterfly. She narrowly missed out on two further Worlds podium places, finishing fourth in the S6 50m Freestyle and S6 100m Freestyle finals.

Her 2018 campaign started well, as the Northampton Swimming Club athlete secured her first Commonwealth title in the S6/S7 50m Butterfly for Team England on Australia's Gold Coast. That was followed up with another gold in the same event at the British Para-Swimming International Meet in Sheffield, confirming her selection for the British team bound for Dublin and the European Para Swimming Championships later in the year.

At the Europeans, Robinson picked up a medal of each colour, with gold coming in her favoured S6 50m Butterfly event. Silver was accompanied by a British record in the S6 100m Freestyle, while there was also a bronze in the 50m Freestyle category.

Robinson's domestic action at the 2017 British Para-Swimming International Meet saw her win gold  - in the MC 50m Butterfly - and S6 400m Freestyle silver, days after she had started her GCSE exams.

Rio 2016 proved to be a memorable and highly successful first Paralympic Games for Robinson, as she claimed a gold medal in the S6 50m Butterfly and a bronze in the S6 100m Freestyle - as well as finishing fourth in the 50m and 400m Freestyle finals.

That Games success came after she impressed at that year's British Para-Swimming International Meet and subsequently made her major debut for Britain at the European Championships in Funchal, going on to win a silver and three bronzes in her first international meet.

Robinson learned to swim when she was four years old and was talent-spotted back in July 2012. She was inspired by watching her now-teammate Ellie Simmonds at London 2012 and continued to progress at Northampton Swimming Club.

After a couple of years out due to a hip injury, Ellie returned to training in 2013 and started her recovery.