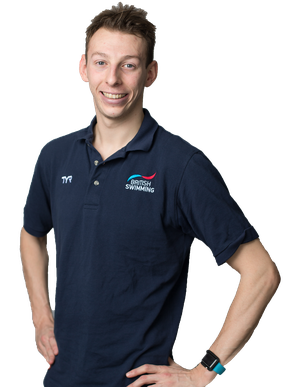 Michael Jones MBE made an impressive international debut for Britain in 2016 as he rose to the top of the Paralympic Games podium to claim gold in the Men's S7 400m Freestyle - before doing the same at European level two years later.

He returned from shoulder surgery in the spring of 2018 and, after being selected as a wildcard for the European Para Swimming Championships, he did not disappoint, striking gold on the final day of competition in Dublin in his preferred S7 400m Freestyle event.

After struggling with injury throughout the 2017 campaign, the National Performance Centre-based athlete managed to successfully qualify for the World Championships in Mexico - but he did not compete there following an earthquake in the host country ahead of the initial event.

Jones enjoyed a memorable Paralympic debut in Rio in 2016, coming out on top in the S7 400m Freestyle final to claim gold and win the title. He also reached the finals in the S7 50m and 100m Freestyle categories.

His time at the 2015 British Summer Championships would have won him silver at that year's Worlds and saw him finish second in the 2015 world rankings for S7 400m Freestyle. It was over that distance that he made the greatest impact, finishing fifth in the MC final at the British Para-Swimming International Meet in Glasgow, then slicing more than five seconds from his PB to win MC silver in the event at the British Summer Championships in August.

Jones finished sixth in the MC 400m Freestyle at both the 2013 and 2014 British Para-Swimming International Meets - his first two at that level - before ducking under the five-minute mark for the first time in that event to claim at the British Gas International Swimming Meet in June 2014.

Michael in the news