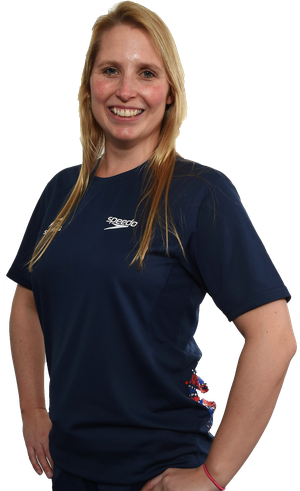 Stephanie Millward is one of the most experienced para-swimmers on the British team, having won a total of 10 Paralympic medals - including two golds - across three Games.

Millward was among the golds again at the 2019 World Para Swimming Championships, as part of the victorious teams in the 34pt 4x100m Freestyle Relay and 34pt 4x100m Medley Relay - the latter in a stunning world record. She also reached the finals of the S9 100m Backstroke and S9 100m Freestyle events.

At her third Games in Rio in 2016, the Team Bath swimmer claimed the first Paralympic titles of her career. Millward won individual gold in the S8 100m Backstroke, as well as helping the Women's 34 pt4x100m Freestyle Relay quartet to victory. Her impressive haul also included an SM8 200m Individual Medley silver, plus bronze medals in the S8 100m and 400m Freestyle categories.

Earlier that year, she had claimed gold in the S9 400m Freestyle event at the European Para Swimming Championships, with an additional silver in the S9 100m Backstroke and bronze in the S9 100m Freestyle. Those Paralympic and European successes followed a move to the National Performance Centre in Manchester in 2015.

In 2014, Millward's dominance at the European level saw her win the S9 400m Freestyle and 100m Backstroke titles for the third consecutive European Championships - and she also added gold over 100m Freestyle and both 34pt relays, plus SM9 200m Individual Medley silver and S9 100m Butterfly bronze at a successful meet.

She starred at the 2013 World Championships in Montreal, scooping four golds and a silver, including the individual S9 titles over 100m Freestyle and 100m Backstroke, and another relay double.

That followed on from Millward’s second outing at a Paralympics at London 2012, a Games from which she came away with no fewer than five medals. Four were silver, in the S9 400m Freestyle, S9 100m Backstroke, SM9 200m Individual Medley and the Women's 34pt 4x100m Medley Relay, with a bronze coming in the 34pt 4x100m Freestyle Relay.

The start of the decade brought Millward her first World medals, with five silvers and one bronze clinched at the 2010 World Championships in Eindhoven, as well as two silvers and a bronze for England at the Commonwealth Games in Delhi, a year before a dominant display at the European Championships of 2011, when she claimed gold in the S9 400m Freestyle, 100m Backstroke and 34pt 4x100m Medley Relay.

It was at the previous European Championships in Reykjavik in 2009, though, that Millward truly announced herself as a major contender at the summit of para-swimming. She won an incredible five golds on her European debut, in the S9 400m Freestyle, 100m Backstroke and 100m Butterfly events, as well as a relay double. That was added to by S9 100m Freestyle silver, plus four golds, three silvers and a bronze at the IPC World Short-Course Championships in Rio the same season.

At the beginning of her career, Millward was on the fringes of the British international able-bodied team before being diagnosed with multiple sclerosis when she was 17 years old. She returned to swimming to qualify for the Beijing Paralympics in 2008, reaching three finals in the S9 classification in her maiden senior international competition.

Steph in the news