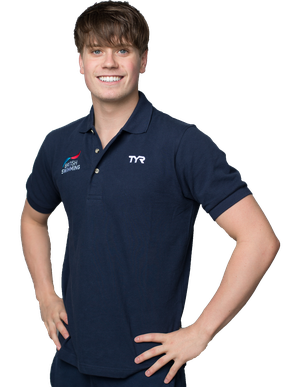 Tom Hamer continues to compete at the very top of his para-swimming classification on the international stage, having won medals at Paralympic, World, Commonwealth and European levels - including a first World Para Swimming Championships gold in 2019.

Hamer - who also claimed silver in the S14 200m Freestyle - was part of the Mixed S14 4x100m Freestyle Relay team that won the title in London.

The previous year, he secured his place on the European Para Swimming Championships squad by winning MC 200m Freestyle gold at the British Para-Swimming International Meet, while there was also triumph in the S14 200m Freestyle at the Commonwealth Games for Team England, a performance that saw him break the world record.

The Europeans in Dublin saw Hamer continue his world-class form across the year, retaining his S14 200m Freestyle title and lowering his own world record in the process. He also picked up bronze in the 200m Individual Medley and was part of a world-record breaking relay quartet in a non-medal event, the S14 Mixed 4x100m Freestyle Relay.

The 2017 season saw Hamer selected in his second World Championship team, but due to an earthquake in the country, the Mexico-bound team were unable to compete. The Paralympic medallist enjoyed victory over the 200m Freestyle at the British Para-Swimming International Meet to qualify for that squad, and he also stormed to victory in the inaugural Skins event.

In 2016, Hamer truly cemented his position on the senior international team as he collected two silver medals - in the S14 200m Freestyle and SM14 200m Individual Medley - at his debut Paralympics in Rio, following on from the European Freestyle title in Funchal ahead of the Games.

On his World Championship debut at Glasgow 2015, the Stockport Metro swimmer made an instant impact in the S14 classification, securing himself a bronze medal in the 200m Freestyle and just missing out on the chance of another medal in the SM14 200m Individual Medley, finishing fourth overall. A silver in the MC 200m Freestyle had sealed his spot on the Worlds team earlier in the year at the British Para-Swimming International meet.

Hamer became a history-maker in 2014, being the first S14 athlete to represent Team England at the Commonwealth Games. He marked it with a silver medal. From there, he went forward to the European Championships in Eindhoven to claim another silver, again in the S14 200m Freestyle.

He initially moved to the National Performance Centre in Manchester in May 2014 and has shown huge potential ever since.

Thomas in the news