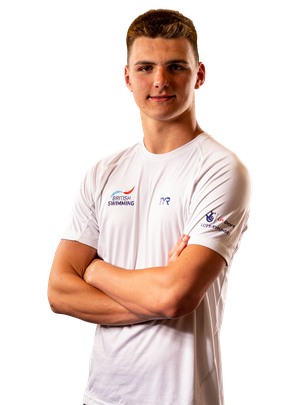 Jacob Whittle won his first medals at World and Commonwealth level in 2022, with the athlete taking advantage of the busy summer to cement his name on the international stage.

The 2022 World Aquatics Championships in Budapest began the summer for Whittle, with the athlete taking bronze in the 4x200m Freestyle Relay. He then moved on to the Birmingham Commonwealth Games with Team England, where he earned a gold and three silver medals - all in team events. His summer then concluded at the European Aquatics Championships in Rome, where he came home with a medal of each colour, also across three relay events.

The highlight of Jacob’s 2022 British Swimming Championships came in the 100m Freestyle. The Loughborough Performance Centre swimmer clinched bronze in an Age Group Record time, and he will hope to move things on again during a packed summer.

At the Tokyo Olympics, Whittle – the youngest member of the Team GB swimming outfit – made the semi-final in the 100m Freestyle, after just missing out on a semi-final spot in the 4x100m Freestyle Relay. These results will be encouraging as he transitions from a flourishing junior career into more senior international competitions.

The 16-year-old was one of many to make his senior international debut for GB at May's European Championships in Budapest.

That meet brought him maiden senior titles on the global stage, with Whittle contributing to Mixed 4x100m Freestyle gold and a silver in the Men's 4x100m Freestyle event, as a sign of the valuable relay efforts he can offer in Tokyo. He also competed individually in the 50m and 100m Freestyle contests.

Earlier in the year, he competed in strong fields across all three sprint freestyle events at the British Swimming Selection Trials, finishing third in the 50m to set a new British age-group record. He broke the 100m Freestyle age-group mark at June's Glasgow Meet.

Whittle trained under Jamie Main at Derventio eXcel for the bulk of his fledgling career before linking up with Mel Marshall at the British Swimming Performance Centre in Loughborough.