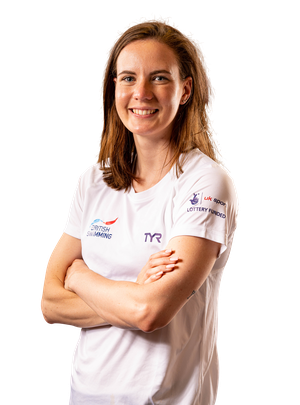 Kathleen’s Tokyo Olympics was a successful one, with an individual 100m Backstroke final coupled with a notable gold medal in the Mixed 4x100m Mixed Medley Relay. In the latter, she helped Team GB to the final in an Olympic Record time, before leading off the team to a World Record in the final.

Dawson returned from the first UK lockdown in 2020 as part of the elite return to training initiative, and the progress from then on under Steven Tigg and Bradley Hay at her University of Stirling base was stark, setting her up for victories in both the Women's 100m and 200m Backstroke at the Selection Trials in London - and the subsequent Olympic selection.

That selection preceded her appearance at a third European Championships in Budapest in May 2021, an appearance that turned out to be truly memorable. She won Women's 100m Backstroke gold in a re-swum final, having won the original final only for it to be recontested after a technical issue. There was also a silver in the 50m Backstroke, as well as an eye-catching duo of gold medals in the Women's and Mixed 4x100m Medley Relays. In the women's event, she duly broke the European 100m Backstroke record over the opening leg.

Previously in her career, Glasgow 2018 was Dawson's second European Championships and she claimed a bronze in the Women's 4x100m Medley Relay, before suffering an ACL injury later in the year.

The Kirkcaldy-born athlete had earlier reaffirmed her position in the senior ranks of British Swimming in 2017 as she secured a debut call-up to the FINA World Championship and Gold Coast 2018 was Dawson's second Commonwealth Games, she finished sixth in both the 50m and 100m Backstroke. She was also part of the 4x100m Medley that finished fifth on the final night of floodlit racing. She made two world finals as a World Championship rookie, finishing seventh as part of the Women's 4x100m Medley quartet and also ranking eighth in the Women's 100m Backstroke.

British Championship silver in the Women's 50m and 100m Backstroke confirmed her position in the top flight of British swimmers, confirming her place on the Budapest-bound team.

Towards the end of 2016, Kathleen joined the University of Stirling swimming programme and now trains under the guidance of coach Tigg.

Dawson broke into the senior ranks of British Swimming when she made the European Championships team in 2016 and secured Great Britain a bronze medal in front of a home crowd in London after touching third in the Women's 100m Backstroke.

In 2014 she was selected to represent Scotland at a home Commonwealth Games where she competed in two finals, finishing fourth in the Women's 50m Backstroke and fifth as one-quarter of the Scottish 4x100m Medley relay team.

Kathleen in the news