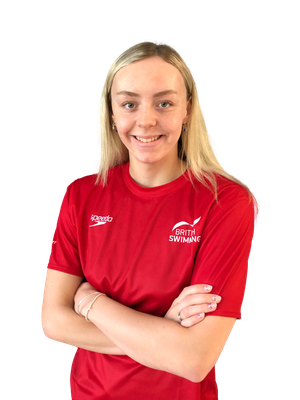 Medi Harris was one of the standout breakthrough British swimmers across the three major competitions in 2022, winning a total of five medals and becoming European champion in the 4x100m Freestyle Relay.

The Swansea University athlete began her summer by making individual finals in the 50m and 100m Backstroke at the 2022 World Aquatics Championships in Budapest - finishing in seventh place in each. Her time at the 2022 Commonwealth Games in  Birmingham saw her pick-up her first senior international medal, as she took bronze for Team Wales in the 100m Backstroke. A silver in the same event at the 2022 European Aquatics Championships followed, with the swimmer also becoming European champion in the 4x100m Freestyle Relay.

After taking gold in the 100m Backstroke at the 2022 British Swimming Championships, she followed up with a silver in the 50m, just one hundredth of a second off the top spot. With a personal best in the 2022 season which would have been enough for a finals spot at the Tokyo Olympics, the Adam Baker-coached athlete gained valuable experience from her maiden senior international outing.