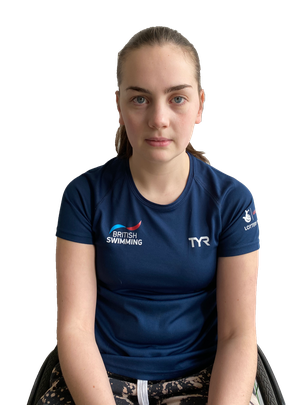 Tully Kearney became a Paralympic champion at her maiden Games in 2021, two years on from sealing a hat-trick of freestyle golds at the 2019 World Para Swimming Championships in London.

Ahead of the 2022 World Para Swimming Championships in Madeira, Kearney set a new world record in the Women's S5 50m Freestyle during a preparatory meet at the Para Swimming World Series in Berlin.

The previous year, at Tokyo 2020, a superb swim in the Women's S5 200m Freestyle saw Tully narrowly pipped to the title as she took silver - and that race preceded a spectacular, world-record breaking effort to take the title in the 100m Freestyle event later in the Games.

At the most recent Worlds in London, Kearney was unbeaten in the finals of the S5 50m, 100m and 200m Freestyle events to claim the victories, breaking the British record in the first two of those categories.

In 2018, the City of Manchester Aquatics athlete made her full return to elite level racing after two years away from major competitions and claimed a medal of each colour at the British Para-Swimming International Meet, a haul that earned her a call-up to the British team bound for Dublin and the European Para Swimming Championships.

Kearney left Dublin with two medals and three British records in tow, including her maiden European title with gold in the S5 100m Freestyle, plus a bronze in the 50m event.

Kearney previously had time away from the pool following the 2015 Worlds due to a deterioration in her condition that led to a reclassification into the S5 category.

Earlier that year, Kearney set a series of personal bests and won MC 100m Butterfly bronze at the British Para-Swimming International Meet earning her a spot at the World Championships in Glasgow.

It would prove to be her most prolific competition to date. Having been reclassified to S9 at the time, Kearney was one of the stars of the entire event, winning four golds - in the S9 400m Freestyle, S9 100m Butterfly, SM9 200m Individual Medley and 34pt 4x100m Medley Relay - one silver and one bronze medal, setting European records in each of her individual victories in the process.

Illness during the British Para-Swimming International Meet the previous year curtailed Kearney's progress as she missed out on the team for the European Para Swimming Championships in 2014.

Kearney initially made her potential clear back in 2011 and 2012, when she finished fourth in the MC 400m Freestyle at consecutive British Championships.

Tully in the news