A brief history of diving from graceful to fancy diving, the sport has been through many changes. Read on to learn more about the origins, and evolution of diving.

Diving has changed over the years and with it the very meaning of the word. At the beginning of the century a dive began the moment the water was touched. Now it means the process of leaping and springing into water.

The first recorded championship in the UK was the Championships of Scotland held in 1889. During this the action comprised a dive from the side of the bath, a dive from about six feet, and a surface dive.

High diving became popular amongst a small circle of enthusiasts, and in 1895 the National Graceful Diving Competition was instituted. It was open to the world and the tests were standing and running dives from 15 and 30feet.

In the late 1890s Otto Hagborg and C F Mauritzi came to London and introduced fancy diving, which was being developed in Sweden. Pioneers such as Sir Claude Champion de Crispigny took it up and as a direct result the Amateur Diving Association was formed in 1901. 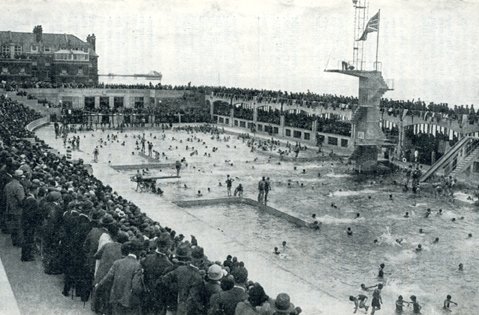 Fancy dives were included for the first time in competition in 1903. There was a springboard event in the 1904 Olympic Games and High Diving was also numbered amongst the sports in the supplementary Olympic Games in Athens in 1906.

G. Melville Clark represented Great Britain in the latter event in 1906, and around this time tariff values were introduced. By the Olympic Games in London in 1908, tables had been drawn up and were used at the event.

Women's diving was included in the Olympic Games for the first time in 1912. It was a simple diving contest from the high board. Miss Belle White gained third place for Great Britain. The first women’s springboard competition took place in 1920.

Plain and fancy diving from the high board for women was not introduced into the Olympic Games until 1928. During the same year the two men's highboard events - one plain and the other fancy - were amalgamated into one competition.

By the 1924 Olympic Games the springboard diving tariff was very complex. There were six methods of performing each dive - standing, running, taking off with one foot, running taking off with two feet and in each case the entry could be made with or without hands.

After 1924 the tariff was simplified and began to assume the form we know today. The 1928 Olympic Games events were confined to compulsory and voluntary dives.

For over 30 years the Amateur Diving Association held its own championships and looked after the interests of divers. In 1935 it was wound up as a separate organisation and merged with the ASA.

Since 1936 the ASA has been responsible for championships and other matters concerning diving and in order to deal competently with items affecting diving the ASA has a Diving Committee comprising people who are established authorities on the subject.