Starting as favourite having been comfortably quickest through the rounds, Peaty got an electric start and never looked back, as despite having a lot of racing in his legs he powered away from a world class field to win by half a second.

Stopping the clock in 26.06, the now six times World Champion was just 0.11 of a second outside his own world record. He also becomes the first man in history to win six World Championship breaststroke titles. Speaking of his achievements, Peaty said:

“I’ve done the triple-double, which is what I came to do and 56 happened, so there’s not a lot else to say really – I’ve completed everything I wanted to do. I put together a pretty perfect race tonight and I was only just off my world record.

“It’s great to come back with all the medals I can and it’s great to get another medal in the relay, which was unexpected. Each World Champs I go to I get more experience and learn even more about how to deal with the pressure.”

Peaty was back in action less than an hour later for the 4x100m Mixed Medley Relay, teaming up with Georgia Davies, James Guy and Freya Anderson, the quartet combining to bag bronze in the final metres of a truly thrilling spectacle.

With many men swimming the opening backstroke leg Davies had her work cut out, but she more than delivered, a brilliant 59.25 split setting the team on their way. Peaty was next up and like James Wilby had done in qualifying this morning, he had to battle through choppy water to make up ground on a number of other nations, which he did before handing over to James Guy. Swimming the fly, Guy made huge inroads on his rivals meaning it was all down to Anderson on anchor.

Despite still being only 18 years old Anderson wasn’t fazed in the slightest, swimming an incredibly mature race. Touching fourth at the turn, the freestyler let rip on the way back and with the crowd going wild she overhauled the Russians in the final few metres to snatch bronze by a tenth of a second. 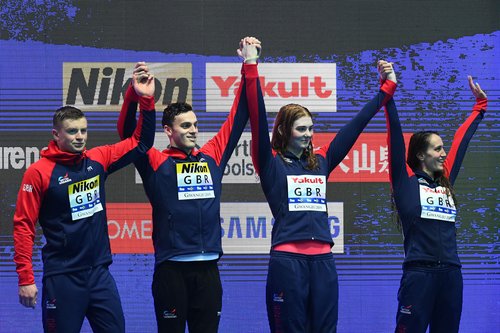 Rightly pleased with their performances, the team shared their thoughts in the mixed zone afterwards, Davies saying:

“I’m so pleased with that. I feel a lot of pressure swimming into Adam and after my heat time this morning I knew I had to pull something more out the bag and I’m pleased I managed to do that.”

“That’s the second fastest split I’ve ever done so I’m definitely on the right path and I’m a lot faster than I was last year in both my freestyle event and that one tonight, so it’s a good confidence builder going into the rest of the week and going into Olympic year. I think this is my eighth world medal now and it’s always great to get on the podium with these guys and represent your country.”

After bringing it home for the team, Anderson finished:

“I wanted to step up from this morning and I knew the arena and the crowd would help that. Knowing that I was going to get mowed down by a few men there was definitely pressure but with that comes a bit more fight!”

There was further success on the night as Great Britain qualified two women for the 200m Butterfly final after Alys Thomas and Laura Stephens backed up their efforts this morning to advance.

Thomas came into this meet with her eyes on a final spot, a solid 2.08.26 performance seeing her finish fourth in her semi-final to make it through as sixth fastest, afterwards commenting:

“I’m into my first World Champs final – that is pretty cool! I’m a bit annoyed with the time and I’m kind of lucky that the first heat was a bit slower and the faster girls were all in mine, which pulled us along a bit. I feel in really good shape, I’ve had a good block of work and my taper has worked really well, so I can’t put a time on it but I want to go quicker tomorrow.”

Stephens on the other hand was just happy to have made the semi-finals on her World Championship debut, but shocked even herself by making the final. Having slowed slightly in the final 50m in her heat this morning, Stephens vowed to come back quicker and that she did, moving from sixth to fourth down the final 50m to secure the final lane in tomorrow’s final.

“Wow! When I looked at that time I thought there was no way, but oh my goodness! I did want a faster time tonight but I’m in the final and I’ve got another shot, so wow! I was really happy just to make it back tonight, but now I’ve got another swim I’m so excited.”

Just moments later Duncan Scott and Tom Dean lined up in the 200m Individual Medley semi-final, Scott in lane three and Dean in eight. Scott was slow out of the traps, seventh at the first turn, but as he did in his heat this morning, he slowly but surely worked his way through the field as the race went on. Making up a big proportion of the deficit on the breaststroke leg, Scott still had the strength to push down the final length, touching second in 1.57.83 to secure his final slot.

“I’ve made it through to the final so I guess that’s sort of job done in a sense, but time wise that’s not going to be good enough tomorrow night. There are quite a few things I need to improve on, so I need to rest up, see what I did there and try and better it tomorrow.”

Tom Dean also acquitted himself well, the young National Centre Bath swimmer putting himself in the mix throughout the race, after his fastest ever heat swim this morning. Dean said he hoped to move it on in the semi-finals and that he did, setting a 1.58.34 lifetime best to finish sixth and just miss out on a final spot at his first World Championships.

“The whole aim is to swim a season’s best at the main meet of the season, that’s what it’s all about. I knew I had to move it on from the heat and looking at my splits it was my freestyle leg that I needed to pick up and bring it home stronger than this morning, so to do that was really great.”

Georgia Davies kick-started the evening in style as she secured lane three for the Women’s 50m Backstroke final thanks to a powerful swim. Getting away well, Davies was neck and neck with Brazil’s Etiene Medeiros all the way, just losing out on the touch by 0.03 of a second. None-the-less, her time saw her qualify third for tomorrow night’s final, which takes place at 20.37 local time.

Full results from the FINA World Aquatics Championships can be found here.

Highlights will be shown on the BBC Two as follows:

Seven up-and-coming British athletes will travel to Barcelona later this month for the final leg of the LEN Open Water Cup.