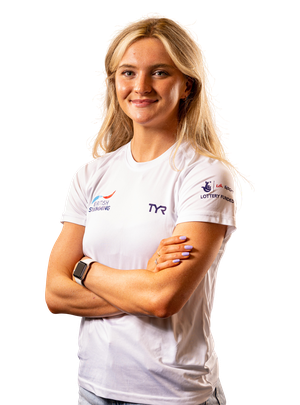 Abbie Wood enjoyed a packed 2022 season, following an eye-catching breakthrough 2020-2021; making a number of finals and trips to the podium as she stepped onto the international stage again.

The 2022 World Aquatics Championships kicked off Wood's summer, with the athlete recording a best finish of fifth in the 4x100m Freestyle Relay. She then enjoyed a successful Commonwealth Games in Birmingham with Team England, as she took five medals, including an individual bronze in the 200m Individual Medley against a field of strong opposition.

Abbie showed off her versatility once again at the 2022 British Swimming Championships, competing in a total of five events throughout the meet. With an outstanding hat-trick of British titles in the 200m Freestyle, 200m Breaststroke and the 200m Individual Medley, she also made finals in the 100m Freestyle and 100m Breaststroke.

With individual finals in both the 200m Individual Medley and the 200m Breaststroke, Wood made an impression at her debut Olympic Games in Tokyo. Missing out on a medal by just a tenth of a second in the medley event, finishing fourth, she was also unfortunate to miss out with the 4x100m Medley Relay team, finishing in fifth place.

Wood returned from the enforced break from long-course competition in 2020 to produce a stunning set of swims at the British Swimming Selection Trials, claiming 200m Individual Medley victory and also dipping under the Olympic consideration time in the 200m Breaststroke as well.

Fresh from being named on the Team GB swimming squad, the David Hemmings-coached athlete looked to make a mark at the 2021 European Championships in Budapest - and it did not take long, with Wood playing a part as Britain's quartet won a brilliant gold in the Women's 4x100m Freestyle Relay in a British record time. From there, she went on to claim her first individual European honour with a brilliant swim to take 200m Individual Medley silver, before another relay gold came as part of the Mixed 4x200m Freestyle Relay.

Rewinding the clock, 2018 saw Wood compete at her first Commonwealth Games for England, she competed in the Women's 200m and 400m Individual Medley, finishing seventh and sixth respectively.

She made her mark at the 2017 British Swimming Championships, two visits to the podium secured selection for her debut FINA World Championships in Budapest where she had to wait until the final day of competition to race.

2016 saw Wood get an initial taste of the senior swimming scene as she represented Great Britain at the European Championships in London. She competed in three events the 800m Freestyle and then the 200m and 400m Individual Medley.

Abbie in the news