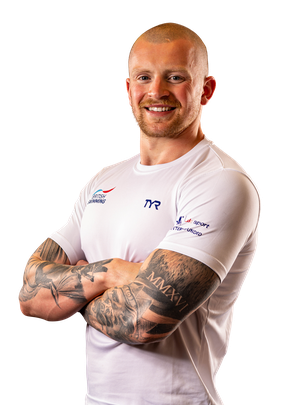 Adam Peaty MBE is an Olympic, World, European and Commonwealth champion as he continues to dominate and lead the way in men's international breaststroke, having become the first Brit to defend an Olympic title in the pool at Tokyo 2020.

Following a foot injury in the Spring of 2022, Peaty was forced to sit out the summer's World Aquatics Championships. The Commonwealth Games then followed, which saw him make a sensational return to the pool. Having finished fourth in the final of the 100m Breaststroke, the Team England athlete then took gold in the 50 metre event in front of an ecstatic home crowd. The victory meant that the athlete has now taken gold in every 50 and 100 metre breaststroke event possible at senior international level.

Adam continued his dominant streak at the British Swimming Championships in 2022, taking two golds from the 50m and 100m Breaststroke. Despite a foot injury that will see him miss the World Championships, the Loughborough Performance Centre swimmer will be looking to be back to full fitness when the Commonwealth Games and European Championships come round later in the summer.

The Tokyo 2020 Olympic Games proved to be yet another unforgettable one for Peaty, who won three medals from three events. Beginning individually, he successfully defended his 100m Breaststroke title from the Rio 2016 Olympics in a comfortable victory, becoming the first Brit to ever defend an Olympic title in the pool in the process. This was then followed up with another gold medal in the Mixed 4x100m Medley Relay in what was a world-record time. Adam rounded off his time at the Games with a silver in the Men’s 4x100m Medley Relay, finishing just shy of another gold medal despite a stunning leg of breaststroke swimming in the second stint of the event.

Peaty took his tally of World Championship gold medals to a staggering eight in Gwangju in 2019, as he defended his 50m and 100m Breaststroke double - breaking his own world-record in the latter event in the semi-finals by setting a time of 56.88 - and played his part in a Men's 4x100m Medley Relay victory. He also claimed bronze in the Mixed 4x100m Medley Relay.

The previous year, the National Centre Loughborough athlete maintained his grip on the Men's 100m Breaststroke event as he successfully defended his Commonwealth Games title to win gold for Team England. In the 50m event, he was touched out at the wall and took the silver medal. His breaststroke leg of the Men's 4x100m Medley Relay pulled the English quartet back into the race, and they ultimately recorded a silver medal podium finish.

In 2017, Peaty became the most successful British male swimmer at any World Championships after claiming a fifth global title in the Hungarian capital of Budapest and a total personal haul of three medals from the competition.

He broke the world record twice on the way to the 50m Breaststroke title, becoming the first athlete ever to go sub 26 seconds. He also took the global title in the 100m Breaststroke and rounded his week off with silver in the Men's 4x100m Medley relay on the final race of the Championships.

There was Olympic history before that for Peaty, at the Rio 2016 Games. He not only became the first member of Team GB to take gold in Brazil, but the first British male Olympic champion in the pool since 1988, as he won the Men's 100m Breaststroke title. Peaty also contributed to the impressive silver in the Men's 4x100m Medley Relay, lowering the previous 100m Breaststroke split by more than a second as he left Brazil as GB's most decorated swimmer.

Adam was subsequently awarded Best Male Swimming Performance of the Rio 2016 Games by FINA in light of his impressive Olympic triumph, which had seen him break his existing world record in the heats and then again in the final by almost a second.

The European Championships in May 2016 were a great Olympic warm-up and a sign of things to come for Peaty as he claimed four more titles, including two individual golds in the 50m and 100m Breaststroke finals, alongside victories in the two Medley Relays.

At his debut World Championships in Kazan in 2015, the Uttoxeter-born swimmer took gold in the 50m and 100m Breaststroke events, as well making up one-quarter of the winning Mixed 4x100m Medley Relay team that broke the world record for a second time.

Adam had a strong 2014 season as he announced and quickly cemented his position among the world’s elite, winning 100m Breaststroke gold and 50m Breaststroke silver for England on his Commonwealth debut in Glasgow, before claiming four golds - including the 50m and 100m Breaststroke double - at the European Championships in Berlin, breaking the 50m world record in the process.

Adam in the news