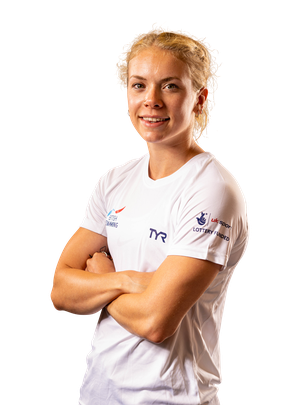 Anna Hopkin became Olympic champion as part of the history-making British Mixed 4x100m Medley Relay team at Tokyo 2020 that won the inaugural title and broke a world record in the process - and she is also a five-time European gold medallist.

Anna was one of the busiest athletes in 2022 - competing in 15 events across all three senior international competitions. All three of her three World Aquatics Championship final appearances came in team events, with the Mixed 4x100m Freestyle and Medley relays giving her a highest finishing position of fourth. She then picked up three medals at the 2022 Commonwealth Games in Birmingham with Team England, before rounding off her impressive summer with a further three medals at the European Championships, including a European title in the 4x100m Freestyle Relay.

Hopkin enjoyed a fruitful British Swimming Championships in 2022, winning two gold medals. In preparation for a busy summer, two commanding performances in the 50m and 100m Freestyle finals set her up well for both the World Championships and the Commonwealth Games in the coming months.

The Tokyo Olympics was a busy one for Hopkin, with all three of the events she swam resulting in finals – and one resulting in her becoming a new Olympic Champion. Alongside fifth and seventh place finishes in the Women’s 4x100m Freestyle Relay and the 100m Freestyle respectively, she was also part of the team that won a  historic gold in the Mixed 4x100m Medley Relay. Swimming the freestyle leg, Anna held off challenges from China and Australia to bring home the win in a World Record time.

The Loughborough National Centre athlete - who trains under Mel Marshall - made Olympic consideration times in both the Women's 50m and 100m Freestyle events at April's British Swimming Selection Trials, before heading to the European Championships in Budapest to claim four gold medals and one bronze.

The golds came as part of a stunning team relay performance across the board, with Hopkin contribuing to victories in the Women's 4x100m Freestyle and 4x100m Medley, as well as the same events in the mixed category. There was also individual bronze in the Women's 100m Freestyle.

Hopkin made her World Championships debut in 2019, reaching the 50m Freestyle final to cap off a fine breakthrough year.

Showing her promise, Hopkin also placed 13th in the 100m Freestyle event before capping off her year by helping the Great Britain team to silver medals in the Mixed 4x50m Freestyle Relay at the European Short Course Championships in Glasgow.

Following that, with the 2020 season on hold, Hopkin made the switch the National Centre Loughborough to work with Marshall, whom she had already built a rapport with at previous international championships.

At her maiden European Championships in Glasgow in 2018, Hopkin helped Great Britain achieve fourth in the Women's 4x100m Freestyle Relay. Individually, she achieved top-20 finishes in both the 50m and 100m Freestyle events.

Hopkin also formed part of the bronze medal-winning 4x100m Freestyle Relay quartet for Team England on the Gold Coast earlier that year, as well as making the final in both of her individual events.

The 'pocket rocket' claimed her debut national title in the 50m Freestyle at the 2017 British Championships, going one better than her silver medal finish the previous year. She has since won that 50m gold again, in 2019.

Anna in the news