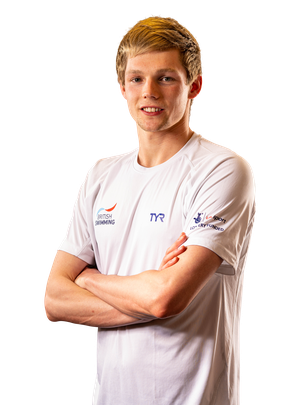 Duncan Scott is an Olympic, World, European and Commonwealth Champion who made the most of a disjointed 2022 by taking five medals at the Commonwealth Games in Birmingham.

Having missed the 2022 World and European Championships through illness, Scott was one of the most successful athletes at the Commonwealth Games with Team Scotland, where he took individual gold in the 200m Individual Medley and four bronze medals in the 100m Freestyle and three relay events.

Duncan brought his best at the 2022 British Swimming Championships, picking up a total of three gold medals – and breaking yet another British record. As well as winning both the 200m Individual Medley and the 200m Freestyle, he topped off the meet with that new British best in the 400m Individual Medley.

Scott’s Tokyo Olympics campaign saw him make history, as the first Team GB athlete ever to win four medals in a single Games. Scott’s world-class quality and versatility saw him claim three silvers in the 200m Freestyle, 200m Individual Medley and the 4x100m Medley Relay, as well as bringing home the GB team in that stunning 4x200m Freestyle Relay success in a European Record time.

Scott - who trains under Steve Tigg at the University of Stirling - claimed two golds and three silvers at his most recent major meet, May's European Championships.

Scott ended the most recent Worlds at Gwangju 2019 with a gold and bronze in tow, finishing third in the 200m Freestyle before powering the Men's 4x100m Medley Relay to gold with a brilliant Freestyle swim in the final leg. He also narrowly missed out on a 200m Individual Medley medal, placing fifth in that final.

The University of Stirling athlete became the most decorated swimmer ever at a Commonwealth Games after finishing Gold Coast 2018 with six medals to his name. That tally included gold in the 100m Freestyle, a 200m Individual Medley silver and four bronzes.

He rounded off another busy season later that year with three continental titles at the European Championships in Glasgow - in the 200m Freestyle and Men's 4x200m Freestyle Relay and 4x100m Medley Relay events - plus a silver in the 100m Freestyle.

Budapest 2017 was Scott's second World Championship outing, and he once again achieved medal success. Gold came in the Men's 4x200m Freestyle Relay, as the British quartet defended their title and posted a new national record, while he was part of the silver medal-winning Men's 4x100m Medley Relay team on the final night of competition - again in a British record time.

Individually, the Glasgow-born swimmer finished fourth in the 200m Freestyle and fifth in the 100m category.

Scott made a memorable Olympic bow at the Rio 2016 Games, as he secured a duo of silvers by playing a part in the Men's 4x200m Freestyle and 4x100m Medley Relay quartets.  He also achieved a fifth-placed finish in the Men's 100m Freestyle final, setting a new British record of 48.01 in the process to become the first British man since Bobby McGregor in 1968 to reach that particular showpiece.

The year of 2016 also saw Duncan compete at a home European Championships in Glasgow, where he claimed two relay golds in the Men's and Mixed 4x100 Medley Relays events.

Making his debut appearance at a World Championships in 2015, Scott came away with a gold medal as part of the Men’s 4x200m Freestyle Relay team.  Earlier in the year, he made his first senior British team at the inaugural European Games, an impressive haul of three golds and three silvers making him Great Britain’s most decorated athlete in Baku.

Duncan in the news