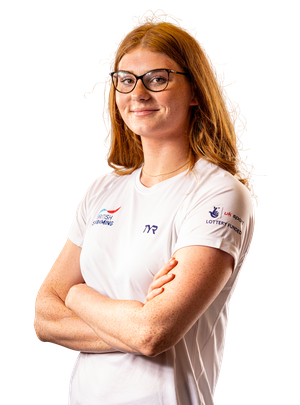 Freya Anderson is an Olympic and multiple European champion who has been a staple in the British Swimming team for the past five years - a tenure she will look to extend following a successful 2022 season.

She was involved in all three of the 2022 major competitions; winning six European and four Commonwealth medals. Her summer began at the World Aquatics Championships in Budapest, where she recorded four top-eight finishes. She then donned the Team England colours for the Commonwealth Games in Birmingham; making the final in every event she entered. Her performance at the 2022 European Aquatics Championships in Rome then saw her pickup silver and bronze medals in the 200m and the 100m Freestyle events respectively. She was also crowned champion in the 4x100m Freestyle Relay and the Mixed 4x200m Freestyle Relay at the same meet.

At the Olympic Games in Tokyo, Anderson was one of the busiest swimmers in the team, competing in a total of five events. Alongside making individual semi-finals in both the 100m and the 200m Freestyle, her highlight, unarguably, was her role in securing gold for the team in the Mixed 4x100m Medley Relay. Freya swam the heats, securing what was then an Olympic record time, putting them first into the final. The team then went on to secure gold, breaking the world record for good measure.

Anderson secured her first World Championship medal in 2019 as part of the Mixed 4x100m Medley Relay team that won bronze in Gwangju - and she followed it up at the end of the year with a memorable performance at December's European Short Course Championships at home in Glasgow.

After showing progress in the Far East by finishing eighth and 12th respectively in the 100m and 200m Freestyle events, on top of reaching the podium in the Medley Relay, the former Ellesmere College Titans swimmer claimed two short-course golds in the same individual events to round out a great year.

In between 2019 and her Olympic debut debut in 2021, 2020 was a year of change, with the COVID-19 pandemic forcing the Olympic Games to be postponed - this prompted a change of training environment, with Anderson opting for the National Centre Bath under the guidance of David McNulty, a move that was already in the pipeline for post Tokyo.

She narrowly missed out on the podium in her preferred individual event, the 100m Freestyle, where she finished fourth overall.

The Gold Coast 2018 Games were a first outing for Anderson at a Commonwealths - and she would go on to win two bronze medals with Team England in the 4x100m and 4x200m Freestyle Relays.

At the 2017 World Championships, Anderson raced in the Women's 50m and 100m Freestyle events before forming part of the British quartet in the Women's 4x100m Medley Relay on the final night of swimming in Budapest.

Setting a new personal best in the process, Anderson had claimed her first British Championship gold in Sheffield in the 100m Freestyle at the national event ahead of the Worlds, therefore earning her place on the Budapest-bound team.

At the British Swimming Awards 2016, she won the Emerging Swimmer of the Year prize following a highly successful season that saw her win gold at the European Junior Championships in Hodmezovasarhely, Hungary.

Freya in the news