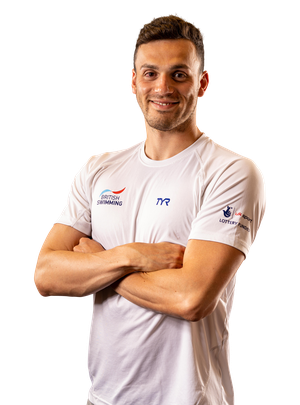 James Guy is an Olympic and world champion who made his full senior international debut at the 2013 World Championships in Barcelona and has medalled at every major benchmark meet since, including two golds and one silver at the Tokyo 2020 Olympic Games.

Guy's time at the 2022 World Aquatics Championships saw his accolades expanded again, as he picked up bronze medals in both the 4x200m Freestyle and the 4x100m Medley Relays. The Commonwealth Games in Birmingham with Team England followed, with Guy taking to the podium in every event he swam. He took home one gold, three silver and two bronze medals from the Games to round off yet another impressive summer for the athlete.

James’ solid set of performances at the 2022 British Swimming Championships served as great preparation for a packed summer of aquatics action. With gold medals in both the 100m and 200m Butterfly, the Bath swimmer then rounded off the week with a convincing swim in the 200m Freestyle final, earning bronze in a genuinely world-class field.

Tokyo’s Olympic Games were memorable for the David McNulty-coached athlete, with his first two Olympic titles being secured. Competing in all four relays he was eligible for, Guy won gold with both the Mixed 4x100m Medley Relay and the Men’s 4x200m Freestyle Relay teams, in world record and European record times respectively. Another memorable relay was the Men’s 4x100m Medley Relay, with James swimming the fly leg to help Great Britain to a silver medal. The 4x100m Freestyle Relay was the last event for James, with the team just missing out on a spot in the final, touching in ninth place.

He won no fewer than six medals to his name at the 2021 European Championships in Budapest, including golds as part of the Men's and Mixed 4x100m Medley Relays, as well as the Mixed 4x200m Freestyle Relay. A bronze in the 100m Butterfly showed his enduring qualities in individual events too.

He will hope to extend that eye-opening run of medals at major meets when he competes in Tokyo, his second Olympic Games.

Guy swam the butterfly leg as part of the Men's 4x100m Medley Relay team that stunned the USA to secure victory in the event in Gwangju's World Championships of 2019, four years on from his 200m Freestyle and 4x200m Freestyle Relay triumphs in Kazan.

The 2018 Commonwealth Games on Australia's Gold Coast - his second outing for Team England - saw Guy claim five medals, including four silvers - three in the relays and one in the Men's 100m Butterfly - and a 400m Freestyle bronze.

He then went on to pick up four more medals at the Glasgow 2018 European Championships, three of them relay golds and an individual bronze in the 100m Butterfly. He narrowly missed out on a podium finish in the 200m Freestyle, ranking fourth overall.

An action-packed schedule at the 2017 World Championships in Budapest saw Guy medal in three of the six events in which he competed.

An individual bronze came his way in the Men's 100m Butterfly, where he broke an eight-year-old British record twice on the way to his podium finish. Guy also helped Britain successfully defend the Men's 4x200m Freestyle world title - an effort which brought a new British record with it - and, on the final night of racing in Budapest, he collected silver as part of the Men's 4x100m Medley Relay quartet, swimming the butterfly leg.

At Rio 2016, Guy claimed two silver medals on his Olympic debut. They came in the Men's 4x200m Freestyle and 4x100m Medley relays, both in British record time. The National Centre Bath athlete also competed individually in the 200m and 400m Freestyle events, securing finals berths in both and finishing fourth and sixth respectively.

Earlier in 2016, he secured the Men's 4x100 Medley Relay title at the European Championships, along with an individual continental bronze in the 200m Freestyle.

Guy truly showed his potential at the 2015 World Championships in Kazan by winning a breathtaking individual gold in the Men's 200m Freestyle, followed up by a silver in the 400m Freestyle.  He then achieved gold for a second time at the Worlds when he anchored the Men's 4x200m Freestyle Relay quartet to a historic victory and on to the top of the podium.

He won his first senior international medal later in the season, lowering the British record again to claim 400m Freestyle bronze for England on his Commonwealth debut at Glasgow 2014.

The previous year saw Guy make his mark among the senior ranks of British Swimming when he made it on to the podium at the British Championships, sealing himself a bronze in both the 200m and 400m Freestyle events.