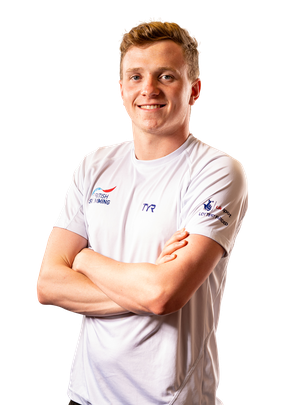 Joe Litchfield made his senior international and Olympic debuts for Britain in the same year in 2021, winning three golds and one silver at that year's European Championships, before a successful 2022 saw him make his mark in the senior ranks.

A busy schedule at the 2022 British Swimming Championships for Joe saw a final in every event for the Loughborough Performance Centre swimmer. The Budapest-bound athlete competed in the 50m and 100m Backstroke, alongside the 100m and 200m Freestyle, finishing between fourth and seventh across the events.

Litchfield – coached by David Hemmings – was a part of the Men’s 4x100m Freestyle Relay team at the Tokyo Olympics that just missed out on a place in the final by less than a tenth of a second. Individually, he also competed in the 200m Individual Medley, finishing just outside of the semi-final places.

Loughborough National Centre athlete Litchfield - who came through the ranks at the City of Sheffield - secured no fewer than four medals during that European bow across a quartet of relays, including golds in the Mixed 4x200m Freestyle and 4x100m Medley, as well as the Men's 4x100m Medley.

Earlier in the year, he earned a brilliant silver in the Men's 200m Individual Medley final at the British Swimming Selection Trials to dip under the Tokyo consideration time, a feat he repeated in the Men's 100m Backstroke to win gold at the subsequent Glasgow Meet. Those performances see him on the plane to this summer's Olympics.

Back in 2018, Litchfield was part of Team England at the Commonwealth Games on the Gold Coast in Australia, having stood on the podium at the World University Games the previous year.