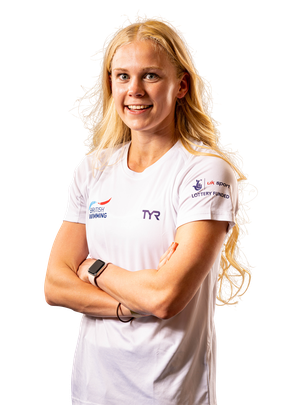 Lucy Hope is a seven-time European champion - including a two golds in a four-medal haul in 2022 - and made her Olympic debut in the pool at Tokyo 2020.

Her 2022 international season began with two finals at the World Aquatics Championships in Budapest in the 4x100 Women's and Mixed Freestyle Relays. She then departed for Birmingham for the Commonwealth Games with Team Scotland, a competition which gave her a best ever individual international finish of sixth in the 200m Freestyle. Her summer was then rounded off with the European Aquatics Championships; a competition which saw her take medals in all four of the team events she participated in, including golds in the 4x100m Freestyle and Mixed 4x200m Freestyle Relays.

Hope was kept busy at the 2022 British Swimming Championships, competing in a total of three events. With a bronze medal won in the 100m Freestyle at the event, she will be hoping that the World Championships and Commonwealth Games this summer bring more success.

At the Tokyo Olympics, Lucy swam both the heats and the final of the Women’s 4x100m Freestyle, with the team finishing in a solid sixth place in what was a stacked field, with the team setting a new British Record in the process.

Hope - who is coached by Bradley Hay and Steven Tigg at the University of Stirling, following a move from her previous Edinburgh University training base - sealed a quartet of European relay titles at the Duna Arena, a clean sweep of her involvements across the Women's and Mixed 4x100m and 4x200m Freestyle Relay events to show her value to the Olympic team.

That followed on from a trio of third-placed finishes in the individual 50m, 100m and 200m Freestyle events at the British Swimming Selection Trials.

Hope had become a European champion for the first time back in 2018 at Glasgow's Tollcross International Swimming Centre as part of the victorious Women's 4x200m Freestyle team. The 4x100m Freestyle outfit were a single place off the podium.

Lucy reached the final of the 50m Backstroke for Team Scotland at the 2018 Commonwealth Games and finished eighth overall. She also played her part in the 4x200m Freestyle and 4x100m Medley relays that finished fifth and fourth respectively.

Her performances on the Gold Coast were preceded by three podium finishes at the British Championships in Edinburgh, where she won gold in both the 50m Freestyle and Backstroke events, plus a silver in the 100m Freestyle.

In 2017, she travelled to Taipei to represent Great Britain at the World University Games and narrowly missed out on medals in the 4x100m and 4x200m Freestyle team events. This was off the back of two trips to the British Championship podium in Sheffield, where she collected bronze in both the Backstroke and Freestyle 50m events.

The LEN European Championships 2016 in London was Hope's first call-up to a senior British Swimming team and provided an invaluable learning experience.

Lucy in the news