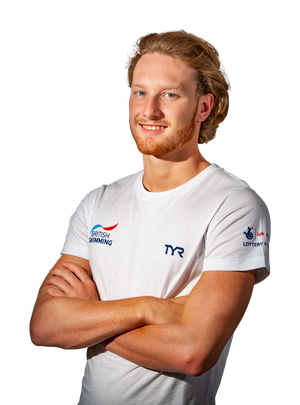 Greenbank claimed bronze in the 200m Backstroke in Gwangju, narrowly missing out on the British record, before swimming the backstroke leg as Britain's men sensationally won the relay title. He also reached the semi-finals in the 100m Backstroke.

The year before, the National Centre Loughborough competitor enjoyed a positive 2018 season that saw him medal at the Commonwealth Games, again in the Medley Relay.

At his debut Commonwealths representing England, he collected silver as part of the Men's 4x100m Medley relay on the final night of racing on the Gold Coast. In his individual events, he was edged out of podium finishes, ranking fourth in both the 100m and 200m Backstroke.

Greenbank also competed at his second European Championships that year, featuring in all of the Backstroke events of 50m, 100m and 200m.

Greenbank's first senior international outing came at the European Championships in London in 2016, gaining valuable competition experience in front of a home crowd. He then made the move to British Swimming's National Centre Loughborough, joining up with coach Mel Marshall after a  number of years working with her at the City of Derby.

That year had begun with his debut British title in the Men's 200m Backstroke, a crown that earned him that spot on the Europeans squad.

The 2015 campaign was a highly successful one for Greenbank on the international stage as he returned home from the inaugural European Games in Baku, Azerbaijan with three medals, including golds in both the Men's 100m and 200m Backstroke, plus a silver in the Men's 4x100m Medley Relay.

Luke in the news