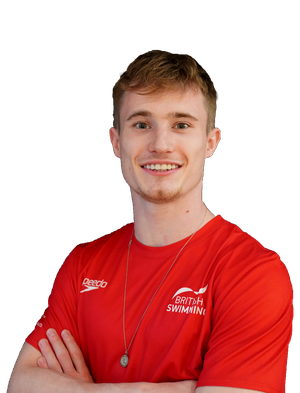 Jack Laugher MBE made history at the 2016 Rio Olympic Games by becoming the first ever Olympic champion in diving for Great Britain, alongside 3m Synchro partner Chris Mears, before following it up with an individual silver in the 3m Springboard to make him the most successful British diver ever.

Laugher has continued to show his class since, confirming Olympic qualification spots for Team GB for Tokyo 2020 with a bronze and silver medal in the 3m Individual and Synchro Springboard events respectively at the 2019 World Championships in Gwangju.

He was also crowned the overall Men's 3m Springboard champion for the FINA Diving World Series.

It was a hat-trick of golds for Laugher in Team England colours at the 2018 Commonwealth Games, a return he quickly followed with silver and bronze medals in the Men's 3m Synchro and 3m Springboard events respectively at the Diving World Cup in Wuhan, China.

The City of Leeds diver's 2018 season concluded with more medals at the Glasgow European Championships, Laugher securing the continental titles in both the 1m and 3m Springboard events, as well as taking silver in the 3m Synchro with Mears.

The 2017 campaign got off to a strong start for Laugher, as he claimed double gold at the National Diving Cup in Plymouth, winning both the 1m Springboard and Men's 3m Synchro events. At the subsequent World Championships, he finished just off the podium in both the 3m Synchro and 3m Springboard categories, placing fourth and fifth respectively.

Laugher won 3m Synchro gold and 3m Springboard silver at the European Championships in London in 2016, a taste of what was to come later in the year at the Rio Olympics.

There, Laugher and Mears made history by clinching the Olympic Men's 3m Synchro title, before Laugher added an individual 3m silver to his unforgettable haul.

At the World Championships in Kazan the year before,  Laugher was a stand-out British athlete and a double medallist again, as he took bronze in both of his usual events.

It was 2014 that saw the Harrogate-born diver truly announce himself as a world contender, winning three consecutive World Series medals in Moscow, Windsor and Monterrey, before claiming 3m Springboard bronze at the FINA World Cup in Shanghai - and then backing that up with two golds and a silver for England at his second Commonwealth Games.

After winning two golds and a silver at the 2012 World Junior Championships, Laugher enjoyed another successful season in 2013, collecting a third straight British title, then finishing 16th in the 3m at the World Championships in Barcelona.

Laugher reached the final at 2012’s FINA World Cup at London Aquatics Centre and made his Olympic debut in the same arena at the Olympic Games, a year after his World Championship debut, an outing that saw him reach the Men's 3m Springboard final.

That senior British bow followed on from previous successes in the World and European Junior events, while his Commonwealth debut came in Delhi in 2010, when he finished 11th off the 3m board.

Jack in the news