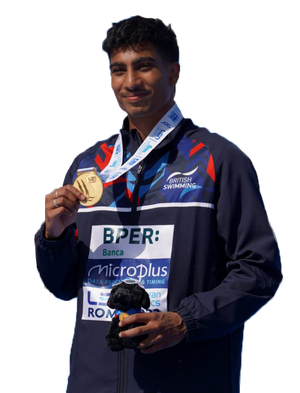 European Champion Kyle Kothari has earned diving success in recent years, and has become an established member of the GB diving team.

Despite injury troubles in past years that even disrupted his Tokyo 2020 qualification, Kyle struck European Gold at Rome 2022 in both the Mixed 10m Synchro, and Men’s 10m Synchro with partners Lois Toulson and Ben Cutmore, respectively.

Kyle’s showings at World-level have seen him earn several medals on both an individual and synchro basis since his debut at the 2017 FINA Diving Grand Prix in Singapore.

A senior-level debut for the Dive London Aquatics Club athlete came in 2014, at the British National Diving Cup, whilst subsequent National appearances have yielded several podium-finishes.