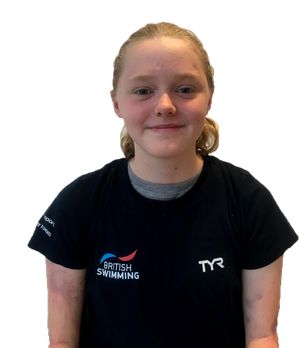 Ellie Challis became Paralympics GB's youngest medallist at Tokyo 2020 when she reached the podium in the Women's S3 50m Backstroke on her Games debut - and she continues to hold one world record and multiple British best after an impressive first few years in international competition.

At the 2022 Para Swimming World Series inc. British Para-Swimming Meet in Aberdeen, Ellie had a busy programme and claimed two medals, winning gold in the Women's MC 50m Breaststroke, followed by a bronze medal in the MC 50m Butterfly.  She also set new British records in the S3 50m and 100m Freestyle.

Challis' time at the Tokyo Paralympics in 2021 was a busy one, culminating with finals in the S3 50m Backstroke, S3 100m Freestyle and the Mixed 20pt 4x50m Freestyle Relay. The backstroke event brought that memorable silver medal, setting the National Performance Centre swimmer up perfectly for future international competitions.

That followed on from an eye-catching debut in the British Para-Swimming International Meet of 2018, when she claimed gold in both the MC 50m Breaststroke and MC 150 Medley events.

The young Clacton-on-Sea swimmer burst onto the scene in 2017, breaking the British SB2 50m Breaststroke record that had stood since 1992, before becoming the world record holder in the event two years later.

Ellie started swimming to be safe in the water. Her big aim in sport is to represent GB at the Paralympics. PE is her favourite subject at school, and she also enjoys trampolining and snowboarding.