The opening day of the Speedo British Summer Championships saw some breath-taking finishes across the board at Ponds Forge.

The Men’s 4x200m Freestyle Relay topped off a scintillating opening day of the Speedo British Summer Championships. A four-way battle between Swansea University, Millfield School, City of Sheffield and Loughborough University for the 17 and over title saw the latter two break away just before the anchor legs. Sheffield’s Thomas Watkin charged down the last 50 metres but ultimately touched just short of Felix Auboeck, the Loughborough swimmer bringing his team home in a time of 7:21.41 to claim the title, ahead of  Sheffield’s 7:23.35.

The bronze medal was then left to Millfield and Swansea, with the former using the guise of having an outer lane to sneak less than a second ahead of the Welsh club into the bronze medal position, finishing with a time of 7:29.36.

The 14-16 year age group also produced a stellar finale, as Mount Kelly and Millfield School went stroke for stroke into the wall for gold. It was Mount Kelly who managed to hold their slender lead to touch first in 7:55.34 to Millfield’s 7:56.00. Bronze went to City of Cardiff in a time of 7:59.58.

The women’s 17 and over relay event of the same distance continued the trend, an opening duel between Mount Kelly and City of Birmingham beginning the race after the opening leg, before the halfway point saw Loughborough University join the fray to make it a front three of breakaway runners. The final leg saw a one-on-one shootout between Mount Kelly and Loughborough, as Rachel Anderson pulled away down the back 100 metres to take victory for the East Midlands club in a time of 8:19.15. It was silver for Mount Kelly in 8:21.92.

The bronze medal was won by Plymouth Leander, as Beatrice Varley took three seconds out of Birmingham’s Katie Thompson to give her team third place and a time of 8:25.29. 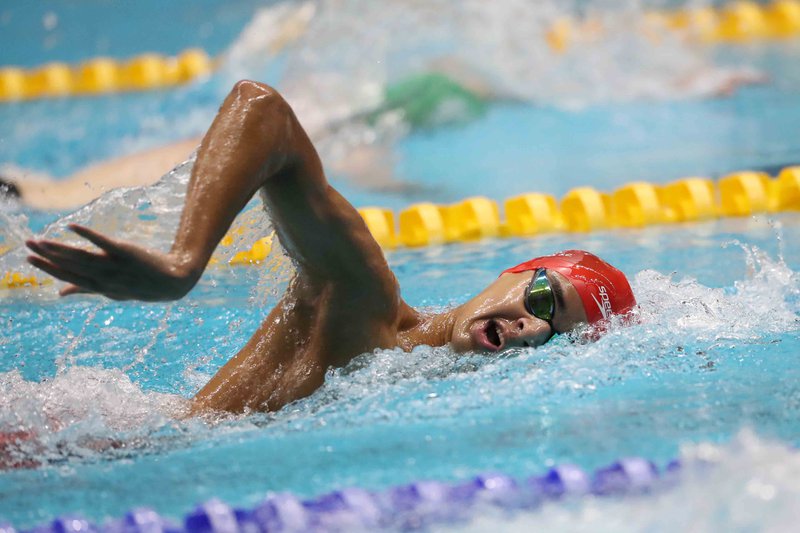 Earlier in the day, City of Liverpool’s Tyler-Melbourne Smith (above) produced a sensational personal best time to take first place in the first event of the 2022 Speedo British Summer Championships.

Still in the 17 year age group, he took control of the race from the off, breaking away from the chasing pack to form a body-length lead towards the middle of the race. This was maintained right the way through to the finish, as he touched home in a new personal best time of 15:35.20 for gold.

The following three swimmers all had senior international experience, with Swansea University’s Nathan Hughes (15:42.86) and Joseph Deighan (15:45.29) anchoring their positions down the last 200 metres to claim silver and bronze respectively. Deighan came out the better in his duel with Loughborough University’s Hector Pardoe, as the 21-year-old Olympian finished in a time of 15:50.53.

The women’s event followed straight after, with a commanding performance from City of Sheffield’s Amber Keegan seeing her take the victory. The 25-year-old shone in her home pool to produce a lifetime best, leading from the front to touch home in a time of 16:37.19.

The battle for the subsequent places was less clear cut, with several swimmers eyeing the runner-up position as the race progressed. Barnet Copthall’s Fleur Lewis came out the better of the bunch, with a time of 16:47.07 earning her silver, while City of Birmingham’s Aimee Hood’s 16:50.18 secured her third.