The first day of British Summer Championships finals at Ponds Forge brought countless exciting moments as the competition got into full swing.

The second day of action at the 2022 Speedo British Summer Championships produced some memorable swims across all age groups, with a whole host of fresh faces getting their hands on national medals for the first time.

The Men’s 400m Freestyle began the first full finals session of the championships, with the 16-year-old final producing an intense battle for the win, with the majority of swimmers all having the lead at one point in the race. The final 100 metres saw a late challenge from Luke Hornsey of East Lothian, the second seed charging from the middle pack to touch out Pershore’s David Annis and take gold in a time of 4:06.42.  The swimmer with the overall fastest time came in the 19 & Over age group as Loughborough University’s Jakob Goodman swam a textbook race to bring home a comfortable win in a time of 3:50.26, upgrading from the silver he won in this same event in 2019.

The Women’s Multi-Classification 200m Freestyle final followed, with all four competitors in the S14 classification. Megan Neave of Repton dictated the pace from the off, speeding ahead of chaser Georgia Sheffield down the first 100 metres before the Bolton Metro swimmer put in a gutsy back half of the race to bring the race down to the last stretch. Her efforts proved fruitful, as Sheffield took the gold in an overall time of 2:20.18 to Neave’s 2:20.79 for the silver. Bronze went to Saskia Webb of Pembs City (2:26.59).

The men’s version of the same event did not disappoint. In a similar field of S14’, a battle between Louis Lawlor of City of Glasgow in lane four, Jack Milne (Dundee City Aquatics) in lane three and Cameron Vearncombe (Plymouth Leander) in lane five developed before Lawlor kept his composure to win in what in the end was a comfortable victory in a time of 2:00.96. Vearncombe managed to see off the competition to win silver in a time of 2:05.29, to Milne’s 2:05.93 in third place.

In the 15-year-old Women’s 200m Freestyle, those lining up in the showpiece provided a delight of a race to the spectators in attendance. With four swimmers all within two seconds of victory, Millfield’s Sophie Davies came out on top, winning in a time of 2:06.32. City of Sheffield’s Molly Baker grabbed second in 2:07.47, as Wyre Forest’s Lillie Grover gave a strong challenge before coming home for bronze (2:07.81). The overall fastest time went to the winner of the 19 & over final; Derventio Excel’s Mia Slevin sitting in second place for the duration of the race before charging down the last 50 metres to beat City of Sheffield’s Candice Hall on the touch, a time of 2:00.63 being enough to take the gold medal and the overall British Summer Championships crown. 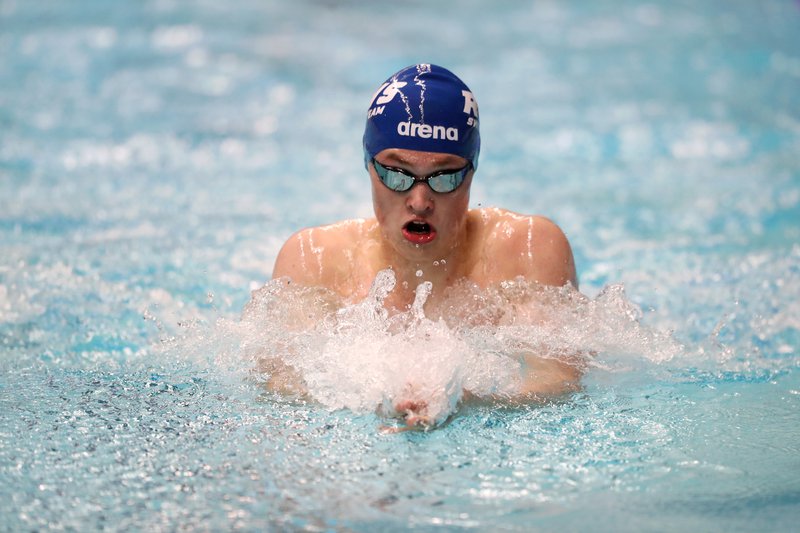 The highlight of the following event, the Men’s 100m Breaststroke, came in the 19 & over final. In a race that could have been won from anywhere at the halfway stage, it was Pravin Mahendrakumar of Bromley who managed to get his hands to the wall first with a time of 1:02.42. This was just a tenth of a second ahead of his clubmate Matthew Rogers (1:02.53), who also managed to fend off a late push from Putteridge’s Lawrence Palmer, the top seed recovering well from a slow start to secure the bronze in a time of 1:02.59.

Returning to the MC events, the Women’s 400m Freestyle Final saw a great battle between Amber Haycock of Rushden and Eva French of Nuneaton, as both girls stayed within a body length of each other before the latter got to the wall first in a time of 5:19.00. In a race with a number of different classifications, the overall results by British Para-Swimming points meant that it was Enfield’s Charlotte Hyde (S7) who took the gold medal, with 680 points. Silver went to World Para Swimming Championship competitor Scarlett Humphrey of Northampton (S11) with 587 points, and bronze to RTW Monson’s Fern Sneddon (S6), who earned 584 points.

The men’s event followed once again, with Newquay’s Kieran Williams (S10) controlling the race, touching first by nearly half a length in a time of 4:30.46 and earning 678 points in the process. As with the girl’s race previously, several classifications meant that the results were reflected differently after the points were calculated. This meant that although the gold still went to Williams, it was Tomas Navarro-Barber of Portsmouth North Sea (S9) who secured the silver (658 points), and Bolton Metro’s Luke Batty (S9) the bronze (642 points).

There were a number of commanding performances in each age group of the Women’s 400m Individual Medley finals, with the 17-year-old final a prime example of just how exciting an IM race can be. City of Sheffield’s Annabelle Wilkinson had what looked like a relatively comfortable lead heading into the end of the backstroke leg, before the City of Leeds duo of Leah Schlosshan and Lara Thomson took the driving seat down the breaststroke and freestyle, the former - who won 200m IM title at the recent European Junior Championships - taking the gold medal ahead of her clubmate in a time of 4:49.68 to Thomson’s 4:55.35. Wilkinson held on to her place in the medals to win bronze in a time of 5:00.15.

A memorable finish in the 18-year-old final was also provided, with Nova Centurion Emma Erskinse (4:55.76) coming off the better in a duel with City of Sheffield’s Abigail Miles (4:56.57) to take gold, which lasted the majority of the race. The bronze medal in the race was won by Mount Kelly’s Imogen Lambert, who produced a scintillating freestyle leg to sneak onto the podium in a time of 4:58.11.

The quickest time of the event went to Amber Keegan, the City of Sheffield swimmer winning the 19 & over final in a time of 4:45.23, adding to her 1500m Freestyle gold that she won the previous day.

As the evening drew to a close, the Men’s 50m Backstroke finals were the penultimate event of the session. The fastest time of the event was achieved by University of Stirling’s Jamie Robertson, who came out on top in what was an intense 19 & over final, swimming a time of 25.22, with four swimmers all coming within half a second of the win. Birmingham University’s Oliver Morgan won silver with a time of 25.40, followed by Wycombe District’s Cameron Brooker for bronze in 25.50.

The final event of the evening was the Women’s 50m Breaststroke finals, and each one brought an equally huge spectacle for the hundreds of spectators at Ponds Forge. It was a memorable performance in the opening 13/14 year old final, as Torfaen’s Theodora Taylor came within milliseconds of the British record to storm to victory. Despite being the younger age group, her time of 32.98 was enough for gold.

The fastest time of the event came in the final race of the evening, as both Ashley Ransome and Cira Fletcher, from Hatfield and Nova Centurion respectively, put in sub-32 second swims to share the gold in a time of 31.99. Poole’s Kayla Van Der Merwe rounded off the medals with bronze, touching the wall in 32.31.