Britain's Tokyo-bound swimmers will step up their preparations for the Olympic Games in competitive style at next month's European Aquatics Championships in Budapest.

Two days after 24 athletes had their names added to the list that will be representing Team GB on the biggest sporting stage later this year, British Swimming can confirm that all of the Olympic team selected thus far will head to Hungary's Duna Arena, with the swimming schedule for the multi-discipline Championships running from 17th-23rd May.

The Europeans will provide a chance for the soon-to-be Olympic class of 2021 to further hone their arena skills and build on important training work. The Budapest meet is also another key qualification opportunity for those who narrowly missed out at the recent British Swimming Selection Trials and will also offer an opportunity for some of the younger names to gain vital major competition experience with Paris 2024 only three years away. A further 12 swimmers have been included, in addition to the Olympic squad, meaning a 40-strong swimming team will board the plane to Budapest.

On top of that, marathon swimmers Hector Pardoe, Toby Robinson and Emily Clarke will take their place in the squad to compete in the marathon swimming events as part of the Championships.

With international racing opportunities so limited over the past year, National Performance Director Chris Spice is looking forward to seeing British athletes back in the water alongside top-class rivals from across the continent. 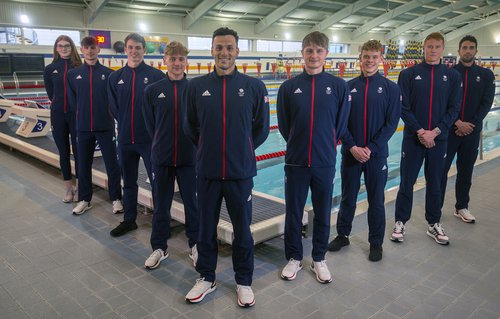 "This event comes at an opportune moment as we step up our final preparations for Tokyo, bringing the team together for the first time since our announcement on Tuesday,” he said.

"Whilst we have enjoyed the experience of domestic racing with the recent Selection Trials and the two meets in Manchester before that, this will be our first time back in international competition in over a year. This will be another big step forward, and we fully support and thank LEN and our fellow European national teams for committing to this important racing opportunity. We are confident that the protocols and guidance will be in place to ensure the safest possible environment for our athletes, coaches and support staff.

"The European Championships are also another important element in our Olympic selection policy, so the week of racing will be an opportunity for some athletes to put in the performances they need to and that we know they are capable of. It is also a key chance to test out our relay squads and seek Olympic qualification where necessary, whilst for the younger members of the squad, it will be a valuable learning experience on their journey into Paris 2024 and beyond.”

Among those who will be looking to catch the eye in Budapest after memorable performances at the London Aquatics Centre earlier this month will be Molly Renshaw - who smashed the British record in the Women's 200m Breaststroke - and two-time European champion Ben Proud, following a stunning return to action in the Men's 50m Freestyle. University of Stirling athlete Kathleen Dawson (pictured, top)will also be keen to continue her impressive form in the Women's 100m and 200m Backstroke events.

As ever, Britain's athletes will look to challenge across the programme - and their displays in the Men's 200m Freestyle will again be monitored closely by rivals from across the world after the jaw-dropping quality on show recently.

Given the selections already made to the Olympic team, qualification quotas are already filled in the following events:

We would also like to advise that, due to ever-changing COVID circumstances, the final Olympic consideration meet will now be called the ‘Glasgow Swim Meet’. The dates have shifted to 3rd-6th June, and the meet will have evening heats and morning finals. Information regarding this meet will be published on the British Swimming website from 3rd May, with entries opening for a limited period the following day (4th May).

British Swimming team selected to compete at the LEN European Championships in Budapest, Hungary (17th-23rd May)

British Swimming has today outlined its selection policy for the 2021 European Junior Championships, which will take place in Rome this summer.

The British Olympic Association (BOA) has today confirmed additional names to the swimming team that will represent Team GB at the Tokyo 2020 Olympic Games this summer, following the second phase of selection at the British Swimming Selection Trials in London last week.