British records tumbled on day two of the British Para-Swimming International Meet in Sheffield, as a host of athletes powered to times that will ensure they are in the running for Paralympic selection.

Reece Dunn was among those to set new national bests and put himself in contention for a place on the plane to Tokyo in the summer, the Plymouth Leander man leading the way as three home-grown athletes dipped inside the S14 consideration time in the Men’s MC 100m Backstroke final.

Dunn took the win and the British record for a second time in the day, his time of 59.96 seeing him as the first S14 Brit in history under the minute mark and earning him a mammoth 965 points. Louis Lawlor and Jordan Catchpole were stroke for stroke throughout and clocked 1:01.47 and 1:01.49 respectively to both get under the consideration mark, while Stephen Clegg (S12) went under his classification’s time in the heats.

The show-stopping performance was one that meant a lot to Dunn.

“I’m quite happy with it! I’ve not done much training going into this, with injuries and everything, so I’m just happy to be dipping under the 60-second mark on the 100m Backstroke. To just go under 60, as an S14, it’s quite a challenge – so to lower that British record to under that 60-second mark is really nice.

“It’s nice to race again - it feels like your training has more to aim for through that, so that’s really nice. In fact it’s just nice to see everyone, teammates from the British team and have everyone around. It’s great to be in the racing atmosphere again!

“Backstroke was one of the things I was aiming for this week, to make the consideration time and the Paralympic team in it for later this year, so that’s really pleasing.”

The Women’s MC 100m Breaststroke showpiece also served up records and consideration times across the pool, an outcome that a packed heats session earlier in the day had hinted at.

It was SB14 Louise Fiddes (pictured) – a reigning world champion in the discipline – who ultimately took victory with a tally of 843 points, thanks to a time of 1:16.84, which saw her under her classification’s Tokyo team mark.

The same could be could be said for Maisie Summers-Newton (SB6 – 819) in second, in a time of 1:36.02, and third-placed Grace Harvey, whose 1:43.82 (for 738) points was another SB5 British record, the Hoddesdon swimmer having already broken that best earlier in the day. SB13 star Rebecca Redfern rounded out a quartet of Brits to go under the consideration time for their class, touching in 1:18.28 to finish fifth on 701 points. 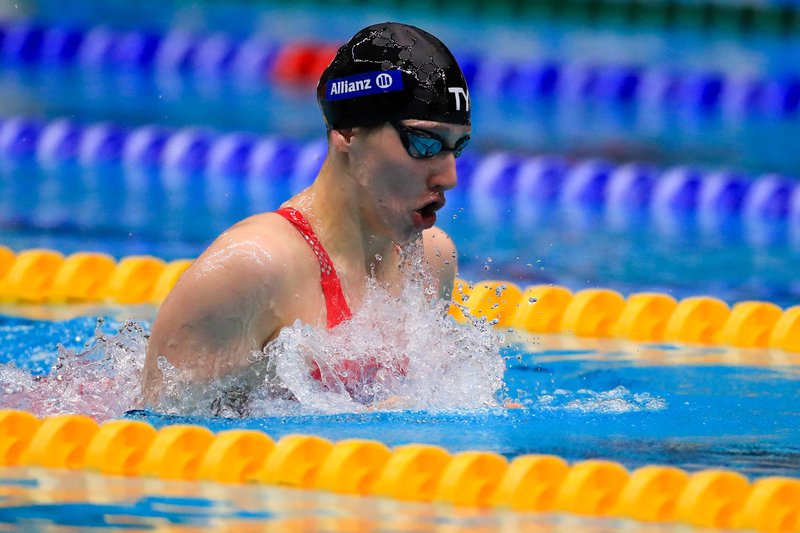 While she did not compete in the final, the MC 100m Breaststroke also brought Suzanna Hext a new national record too, the SB4 athlete’s time of 2:09.87 bettering a mark that had not been threatened since 1994.

Scott Quin stole the show in the men’s event, outpacing rival and British teammate Conner Morrison down the back 50m to claim World Series victory with a tally of 918. More importantly, his time of 1:05.97 was well inside the SB14 mark for Paralympic consideration, the Rio 2016 silver medallist building on what was a strong heat, to provide another reminder of his enduring class.

“I’m quite happy with my day’s racing. Consistency is the key thing I’ve been looking at. I’ve not arrived here fully tapered so for me it is all about focussing on the process, see what I can do, and yes, I’m happy with the outcome,” said the 30-year-old.

“It’s two years now since I’ve been within the consideration time for Tokyo. Looking back at what we’ve been doing at the Manchester Meet and Time Trials I’ve been getting quicker and quicker. I feel I have been climbing a mountain but have now reached the Lodge, so I can camp out for a day or two, then we go again from Monday.

“I’ve been training with Mat (Trodden) at Edinburgh University since July because of Covid, and there I’ve got a great bunch of breaststroke buddies to train with. It’s all going well and I feel like I’ve found that piece of the jigsaw I’ve been looking for. It was tough to change programme but I did it for me, and my support team, from physios, to S&C, to the coaches, we all fit together and it is pure gold.”

Hannah Russell made it two victories in two days with a dominant display in her favoured event, the Women’s MC 100m Backstroke, the first of Friday’s finals.

The Manchester National Performance Centre athlete led from start to finish, building well into the race and ending strongly to clock an impressive 1:08.79 for 885 World Series points, ahead of compatriot Stephanie Millward (S9 – 759) in second and Emeline Pierre of France (S10 – 704) in third.

Russell’s display also saw her easily inside her S12 Paralympic consideration time for the second time in the day, meaning it has been an impressive start to BPSIM 2021 for the double Paralympic champion.

In the Women’s 50m Breaststroke, an all-SB3 contest, Jonne Molleman of the Netherlands kept up her perfect run of wins for the meet by clocking a 52.99 to earn 980 points, ahead of Karina Lauridsen (456) of Denmark and M Fernandez Infante (341) of Spain, who were second and third respectively in terms of World Series points. Molleman would also go on to win the Women’s MC 50m Backstroke later on, tallying 887 points in that success. Estonian Matz Topkin won the men’s showdown with 783 points, ahead of Israeli pair Dadaon and Ariel Malyar.

Lyndon Longhorne (SB3 – 482) placed third in 1:00.54 in the Men’s MC 50m Breaststroke, as Ami Omer Dadaon (SB3) continued what is becoming a strong BPSIM for the Israel team, taking the win in a time of 55.68 for 620 points. Earlier in the day, Longhorne had gone under a British S4 record that had stood since the Atlanta 1996 Paralympic Games by clocking a 53.31 in the Men’s MC 50m Backstroke heats.

Ahead of the evening session, a minute’s silence was held at Sheffield’s Ponds Forge as a mark of respect following the sad news of His Royal Highness The Prince Philip, Duke of Edinburgh’s passing.

Click HERE to watch every heat and final from BPSIM 2021.

Full results can be found by clicking here

As preparations are fine-tuned for Aberdeen 2022, Thomas Hamer reveals how his activities away from the pool provide a boost to his training efforts.

Sharing details of a below the knee amputation on her right leg on social media, Alice Tai thanks those who have supported her throughout the journey.

Perry fired up to champion change

William Perry has got Paralympic and European finals under his belt in the past 12 months – and now he has sights on further progression in the pool, while using his platform to challenge inappropriate behaviours towards people with conditions of dwarfism.