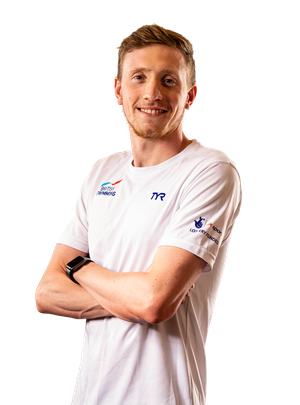 Max Litchfield continues to lead the way over the Men's 400m Individual Medley for Britain, earning a place at his second Olympic Games after taking to the podium in that event at the 2021 European Championships.

Litchfield - who trains under David Hemmings at the Loughborough National Centre - claimed 400m IM bronze and added a silver in the Men's 4x200m Freestyle to that in Budapest.

After reaching the final of the 400m Individual Medley at the World Championships in Gwangju and ultimately finishing seventh, Litchfield produced a stunning swim on home soil, as Glasgow hosted the European Short Course Championship, to secure the gold medal in that same category.

The year before, Litchfield missed the Commonwealth Games in the spring of 2018 through injury but worked hard on his rehabilitation to be back for the European Championships - again in Glasgow - where he claimed silver and bronze in the 400m and 200m Medley events respectively.

The 2017 World Championships in Budapest delivered agonisingly close finishes for Litchfiel,d as he ranked fourth in both the Men's 200m and 400m Individual Medley events, despite setting new Commonwealth and British records respectively.

Earlier that year, the National Centre Loughborough athlete had a home crowd on their feet as he showed his quality by winning gold in both the 200m and 400m Individual Medleyz with dominant performances at the British Championships.

The 2016 Olympic Games were a debut outing for Litchfield as part of Team GB - and he came within touching distance of a maiden Olympic medal at the first time of asking.

He reached the final of the 400m Individual Medley and smashed his personal best on the way to an incredibly close fourth-placed finish in the showpiece.

Ahead of the Games, Litchfield competed at the London-held European Aquatics Championships, achieving finals berths in both the 200m and 400m Medley events, after clinching victory in the 400m category to take his maiden national title in a time of 4:12.05 earlier in the year - a display that saw him dip under the qualification time for Rio 2016 and therefore book that Olympic spot.

A European Championships debut in Berlin came in 2014, when he finished seventh in the final of the 400m IM. Litchfield also achieved 12th-placed finishes in both the 400m IM and 1500m Freestyle for Team England at the 2014 Commonwealth Games.

Max in the news