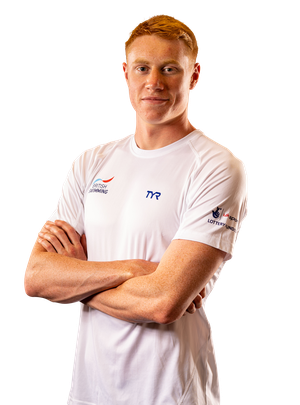 Tom Dean was one of the British stars of the Tokyo 2020 Olympic Games - a trend which he continued with many more trips to the podium in 2022.

Dean was one of the busiest athletes on the team during the summer of 2022, starting with the World Aquatics Championships in Budapest where took three bronze medals, including one in his flagship 200m Freestyle event. His success followed at the Commonwealth Games in Birmingham, as he became Team England's most decorated athlete at a single edition of the event - taking a total of six silver medals and a gold in the 4x100m Medley Relay. His summer was then rounded off in Rome at the European Aquatics Championships, with the athlete taking a medal of each colour,  the gold being in the Mixed 4x200m Freestyle Relay.

Tom continued his consistent performances in the pool with a hat trick of silver medals in the 100m Freestyle, 200m Individual Medley and the 200m Freestyle at the 2022 British Swimming Championships, ahead of an exciting summer of World Championships, Commonwealth Games and European Championships.

The Tokyo Olympics were an incredible success for the Bath Performance Centre man, with two gold medals from two events. Dean claimed a stunning Olympic Title in the Men’s 200m Freestyle, where he touched out fellow Brit Duncan Scott to secure the gold in an extremely close and exciting final that brought the first British gold-silver combo at an Olympics in more than a century. His other gold came in the 4x200m Freestyle relay, where he led off the team to a comfortable win in a European Record time.

Before that, the Bath National Centre athlete claimed the first senior individual medal of his career and made his World Championships debut during a busy 2019.

Dean's impressive performances saw him included in the British team for the Worlds in Gwangju in July, the University of Bath swimmer finishing 11th in the 200m Individual Medley and ninth as part of the 4x200m Freestyle Relay quartet.

That was followed by a memorable outing in the European Short Course Championships in Glasgow at the end of the year, when he secured silver in the 400m Freestyle - his first solo international medal in senior competition.

Dean narrowly missed out on a spot in the 200m Individual Medley final at the European Championships in 2018, after he posted the ninth-fastest time in the heats. The youngster also competed in the 400m Medley event and ranked inside the top 15.

Notably, though, Dean played his part in helping Great Britain claim gold in the Men's 4x200m Freestyle relay, picking up his maiden senior international title as they became European champions.

The 2018 British Championships proved fruitful for the Maidenhead-based athlete as he claimed gold and the domestic crowns in both the 200m and 400m Individual Medley events.

As a junior, Dean returned a multi-medallist from the 2017 European Junior Swimming Championships in Netanya, Israel after he topped the podium in the 200m Individual Medley and followed it up with a silver medal finish in the 400m IM.

Tom in the news