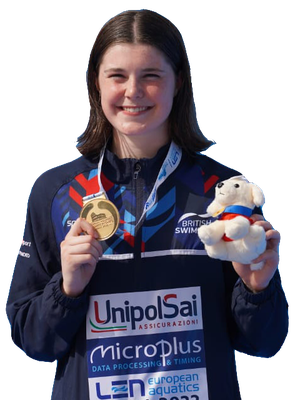 Andrea Spendolini-Sirieix's eye-catching rise on to the senior international stage saw her make her Olympic debut in 2021 and will continue with her maiden World Championship and Commonwealth Games appearances in 2022.

The 2022 British Diving Championships saw Andrea clinch silver in the Women’s 10m Platform, finishing just 0.25 points behind Eden Cheng in a thrilling final. The duo then teamed up for the first time at a British Championships in the 10m Synchro, picking up bronze.

Spendolini-Sirieix earned her place as the youngest member of the Team GB diving team at Tokyo 2020 after a string of eye-catching performances over the previous two years, including two medals at the 2021 European Championships. In Tokyo, aged only 16, Andrea went through the rounds and reached the Olympic final in the Women's 10m Platform, ultimately finishing seventh.

At those European Championships earlier in the year, the Dive London Aquatics athlete claimed Women's 10m Platform bronze with a composed list of dives, as well as securing bronze with Noah Williams in the Mixed 10m Synchro. She also narrowly missed out on the podium at the FINA Diving World Cup earlier in the year at the Tokyo Aquatics Centre.

Despite the diving season of 2020 being disrupted by the global COVID pandemic, Spendolini-Sirieix - who trains under coach Lin Chen - enjoyed a memorable year, winning her first senior title with Women's 10m Platform gold at the British Championships, before following that up with the same title at the FINA Grand Prix event in Rostock, Germany.

The year ended with her winning the BBC Sports Personality of the Year Award, a prize whose previous winners includes Tom Daley.

In 2019, Spendolini-Sirieix picked up a European Junior Diving crown in Kazan, teaming up with Emily Martin to win the Girls 10m Synchro competition. A mere 0.20 point deficit saw her miss out on Women's 10m Platform bronze at the 2018 British Championships, aged only 13.

Andrea in the news