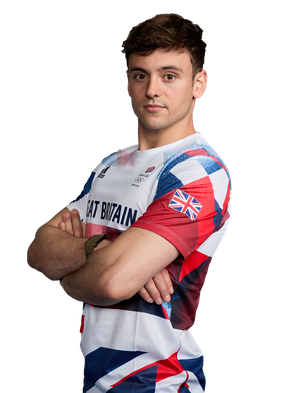 Tom Daley is one of the biggest names in world diving and one of the most popular sportsmen in Great Britain, having won medals at every level of the sport, including his maiden Olympic title alongside Matty Lee in the Men's 10m Synchro at Tokyo 2020, as well as gold at three World Championships - in 2009, 2015 and 2017 - and bronze at both the London and Rio Olympics.

Daley's appearance at a fourth Olympic Games would prove an unforgettable and emotional one, as he and Dive London teammate Lee produced a combined performance of brilliant composure and quality to secure gold in the Men's 10m Synchro by 1.2 points, thanks in part to a stunning final dive when the lead was theirs.

After claiming Commonwealth gold in the 10m Synchro in 2018, Daley took a break from competition, returning to form in 2019 with gold in Montreal and London in the FINA Diving World Series - as well as being crowned overall 10m Platform champion - and then taking 10m Synchro bronze at the Worlds in Gwangju, alongside Matty Lee.

The 2017 campaign was a successful one on the global stage for Daley, who began with Mixed 3m Synchro gold and Mixed 10m Synchro silver at the British National Diving Cup on home soil in Plymouth.

That preceded his fifth consecutive appearance at a World Championships in Budapest - and the Dive London Aquatics athlete impressed with a stunning performance in the Men's 10m Platform final, leading through every round to claim the gold medal with nearly 600 points. He also stood on the podium, alongside Grace Reid, after claiming silver in the Mixed 3m Synchro, as well as finishing fourth with Dan Goodfellow in the Men's 10m Synchro.

Daley enjoyed another strong year in 2016, a campaign in which he secured the second Olympic medal of his career, a bronze in the Men's 10m Synchro, alongside Goodfellow. That achievement was off the back of a highly successful European Championships, where he won two golds - in the Men's 10m Platform and Mixed 3m Synchro events - and a silver medal.

The second of Daley's three World titles to date came in the 2015 Championships in Kazan, where he helped Britain to gold in the Mixed Team event, on top of a bronze in the individual 10m Platform category.

After switching to a new coach and training base in 2014, the Plymouth-born diver collected numerous international medals across the year, winning silver and bronze on the World Series, before defending his individual Commonwealth 10m Platform title in Glasgow - and then claiming silver in the same event at the European Championships in Berlin.

Despite an injury-plagued 2013, Daley defended his British title, won a World Series gold in Edinburgh and reached the 10m Platform final at his third World Championships, finishing sixth.

It was at the London Olympics in 2012 where Daley won the hearts of the British public, clinching an emotional, last-gasp bronze medal in the 10m Platform event.

Earlier that year, he won the overall World Series title, as well as his second European gold - in the 10m Platform event -and his London 2012 spot with triumph at the British Championships in Sheffield.

That was after he burst on to the scene by winning European 10m Platform gold as a 13-year old in 2008, and then reaching the Olympic final on his Games debut at Beijing 2008, ultimately finishing seventh.

Tom in the news