A virtually flawless display from start to finish, the British pair won their second gold in as many weeks, after World Cup success in Japan exactly two weeks ago, however this time there was a 477.57 personal best score to boot. What’s more, despite such a decorated career, Daley has never been crowned European Champion in this event, showing the magnitude of their achievement.

Diving second of eight pairings, Daley and Lee executed two strong required dives, before moving through the gears as they hit their optionals. Leading at the halfway mark, the Dive London duo, coached by Jane Figueiredo, pressed on the accelerator, a truly stunning Back 3 ½ Somersaults Pike (207B) rewarded with 97.20 points, extending their lead.

That being said the Russian pair, Aleksandr Bondar and Viktor Minibaev, who took World Championship silver in 2019 when Daley and Lee won bronze, weren’t going to go down without a fight, but the Britons turned the screw once more with a 92.82 point Reverse 3 ½ Somersaults Tuck (307C) meaning a strong final dive would secure the title. 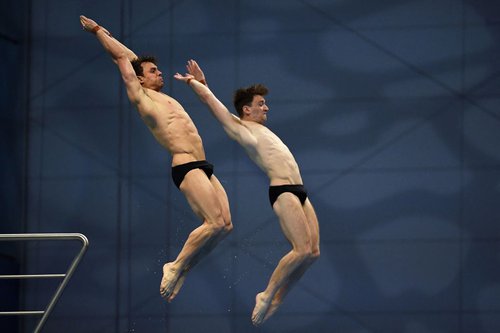 Showing both poise and panache, Tom and Matty delivered, another dive that scored in excess of 90 points clinching gold.

“I feel really, really good. The whole lockdown situation made me really miss competing and I feel like I learnt why I love doing the sport. I’m now trying to embrace it all I can, enjoy it and just working really hard, and it’s all paying off. I’m just really happy with where I’m at.

“It means so much to win this title and I’m very, very happy with it. There’s room for improvement still, even with a PB, but I’m just happy with how the World Cup went and now the European Championships."

“I’m absolutely delighted and that’s the first time I’ve won a synchro gold medal at the European Championships. I think we were five points higher than our previous personal best at the London World Series, so I’m just really happy. Our last dive wasn’t the best we could have done it, so there’s still room for improvement and we’ve got eight or nine weeks until we compete at the Olympics.”

Daley will go again tomorrow in the individual event, alongside Noah Williams, the Men’s 10m Platform bringing the diving action in Budapest to a close.

Back with Saturday’s action and the Women’s 3m Springboard final rounded out proceedings, with Scarlett Mew-Jensen the sole Brit in action. Having sailed through the prelim this morning, the David Jenkins coached diver once again demonstrated her rising credentials, however couple of mistakes meant she couldn’t quite keep pace with the medallists who she was challenging early on.

A brilliant (405B) was rewarded with 69.75 points in the second round, and the Dive London athlete finished with an equally good (5152B) to finish in eighth place overall, fresh off the back of a seventh place finish at the World Cup.

“It’s such a privilege to be here, especially with the times we’ve had with coronavirus, and I’m going to take many, many positives away from this. Obviously there were some misses in there, but I’m excited to get back to training and work on them.

“Having the atmosphere again has been amazing, and I think I can say again for everyone that we’ve missed it a lot and it’s incredible to be back.”

Follow all the action from the European Aquatics Championships, with details of how to tune into upcoming live stream coverage HERE.

Britain’s divers provided an unforgettable finale to the aquatics programme at the Commonwealth Games by sealing two gold medals and one silver across the last two events of the competition.

A strong finish to Matty Lee’s list of dives earnt the Team England diver his second medal of the Games in front of a packed Sandwell crowd.

Dan Goodfellow clinched his first individual international title as Britain's divers delivered a sublime lockout of the Men's 3m Springboard podium, before the Women's 10m Synchro served up two more medals on a memorable night at the Commonwealth Games.