British Record for Humphrey as action continues on Day 3

Scarlett Humphrey lowered her own British Record on two occasions at Ponds Forge as the crowd were treated to some more impressive swimming.

Day 3 of the Speedo British Summer Championships continued to please; with a whole host of exciting finishes and competitive racing in front of a passionate crowd at Ponds Forge, and a British Record to top off the proceedings.

The Women’s MC 100m Backstroke produced excitement across all classifications but it was Northampton’s Scarlett Humphrey who stole the headlines; securing a new British Record of 1:26.79 in the heats, lowering her own record which was set earlier this year. She then went one step further and lowered it again as she swum an unbelievable time of 1:25.03, which bought her fourth place overall. The gold medal went to Georgia Sheffield of Bolton Metro, as Megan Neave of Repton and Abbie Hampshire of Skipton won silver and bronze respectively.

Fresh from the World Para Swimming Championships in Madeira, Humphrey has had a breath-taking year both domestically and internationally, with the new record highlighting just her progression with each passing competition.

The Women’s 800m Freestyle was the only event of the day to have the medallists decided in the morning session, with a heats declared winner format being used. Kicking off the proceedings was City of Salford’s Amelie Blocksidge; the 13 year old producing what has come to be a routinely strong performance to pick up her third gold medal in as many days at these championships.

A close fought victory was achieved in the 15 years age group, as Chelmsford’s Cait Cotter secured the gold by a narrow margin, just ahead of Nova Centurion’s Jessica Brandom, who set her time a number of heats before.

It was once again City of Sheffield’s Amber Keegan who achieved the fastest time in a distance freestyle event, as she took victory in the 19 & Over age group with a commanding victory over Barnet Copthall’s Fleur Lewis and University of Stirling’s Michaella Glenister, who won silver and bronze respectively.

The Men’s 200m Butterfly finals opened the last session of the day, as Llewellyn Porter of Camden Swiss put in a textbook swim to take the 13/14 age group gold by working the last half of the race to take the lead from Royal Wolverhampton School’s Harry Chandler, who touched first at the 100 metre turn but eventually finished in fourth position. Silver and bronze went to Max El-Mokadem of RTW Monson and Luke Brussels of City of Manchester Aquatics respectively.

It was a tight finish in the 15 year-old race of the same event, as Leonardo Brero, also of Camden Swiss, managed to come off the better of the group to take gold in a last dash for the finish ahead of Plymouth Leander’s Wongsakorn Patsarman, as Raheel Mahmood of Romford Town squeezed himself into the bronze medal position.

East Kilbride’s Scott Fleming came off the better of the field in the 16 years final as he held his nerve to close out the race ahead of a charging Samuel Ryan of Orpington, who managed to come from behind to secure the silver medal. Bronze went to Incas’ Matthew McMillan who touched out the rest of the field, as they all came within a few seconds of the win.

The great finals in the 200m Butterfly just kept coming, with a three-way finish between Swansea University’s Antonio Rodriguez, Plymouth Leander’s James Hart, and City of Leeds’ Charlie Broome all putting in stunning performances in the 18 year-old final, as the latter managed to get to the wall first by the slimmest of margins. Silver went to Hart, who in turn got to the wall first ahead of Rodriguez, who both looked to be favourites for the gold before a late charge from Broome.

The fastest time of the event went to Loughborough University’s Jakob Goodman, as he added another gold medal to his collection in a high-quality 200m Butterfly final. He led from the start in what was ultimately a measured victory, with a jubilant celebration in front of the spectators. 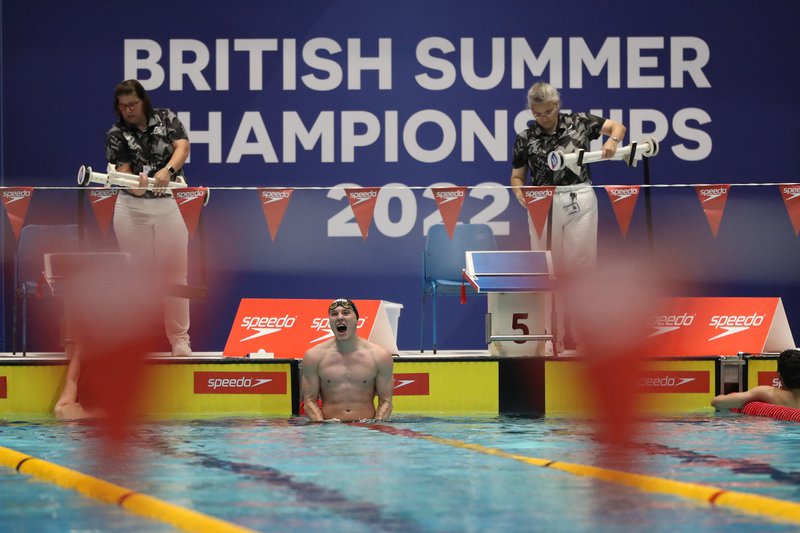 A very close race in the Women’s 15 year-old 100m Backstroke final was one of the most exciting race of the evening, as seven competitors all came within two seconds of victory. It was Annabel Crees of Leamington who got to the wall first, securing gold, after a race that could’ve been anyone’s right up until the finish. Jessica Gable of RTW Monson came in a couple of tenths behind for silver, as Norwich Swan’s Amara Addison clinched the last medal spot.

The 17 year-old final also brought the goods as Anna Green of Warrender Baths Club won a highly competitive race, with almost every lane having one hand on the medals at some point.

All ten athletes came within just over two seconds of a medal in the 18 year-old final, with City of Leeds’ Kidiest Hodgson claiming gold, as the silver was shared between Team Bath’s Niamh Ward and York City’s Mollie Garratt in a race that kept up the trend of unpredictability right through to the final touch.

The fastest time of the event was done in the 19 & Over final; Mid Sussex’s Sophie Shaw claiming the gold as Loughborough University’s Rachel Anderson and Honey Osrin were forced to settle with silver and gold respectively.

The Men’s MC 100m Backstroke final contained a stacked field, with Louis Lawler of City of Glasgow taking another gold to add to his 200m Freestyle victory the day before. The silver medallist in that event Cameron Vearncombe again took silver, as the Plymouth Leander swimmer held a comfortable points lead from Kingston Hull’s Owen Garsides, who came home for the bronze.

The Men’s 100m Backstroke drama continued with three swimmers all putting in sub-minute swims in the 15 year-old final, as Mount Kelly’s Fergus Thomson came out on top. It was Bishop Stortford’s Toby Godsell who produced a late challenge for the win as he ultimately came up just short; winning the silver medal ahead of Kingston Hull’s Rio Daodu.

A mighty contest was had in the 16 year-old final, as Poole’s Charlie Meek added to his 50m Backstroke gold from the previous day. After a stern challenge from lane 0, he held on to touch out Chelsea & West’s Edward Marcal Whittles and Pershore’s David Annis into silver and bronze respectively.

It was once again the 19 & Over final which provided the fastest time, as Jonathon Adam of Bath National Centre put in a gutsy performance to touch out Birmingham University’s 50m silver medallist Oliver Morgan into the same position. It was third seed Cameron Brooker of Wycombe District who came in for the bronze medal, as the night kept on delivering.

The Women’s 200m Breaststroke finals continued the memorable moments, as 13 year-old Theodora Taylor from Torfaen Dolphins won the 13/14 years final by a dominant margin, coming close to the British Record line in several parts of the race.

The 15 year-old final provided a number of leaders at different stages of the race, with the second half seeing a number of late charges from swimmers either side of the top seed. As five swimmers all turned for the final 50 metres within around a second of each other, a final dash to the finish saw Millfield’s Charlotte Hardy take the win from lane 7.  Bishop Stortford’s Kirsty Neill came in a couple of tenths behind for silver as Lotta Schulze of Mount Kelly also nipped into the medals for bronze.

A tense three-horse race for the 17 year-old title was ultimately won from Leah Schlosshan, though it wasn’t without drama. Having already secured two gold medals at the meet, she made it a hattrick by managing to continuously keep just ahead of Garioch’s Nula Gow and Repton’s Hannah Bowley, with the pair both keeping on the hips of the City of Leeds swimmer right until the final touch to earn respective silver and bronze.

The fastest time of the event went to Lily Booker of Loughborough University; the athlete controlling the race from start to finish ahead of a battle for the medals to claim what was a dominant victory. A four way battle for the subsequent places saw Hazal Ozkan of Mount Kelly maintain her position by a slim margin from Aberdeen’s Yvonne Brown. 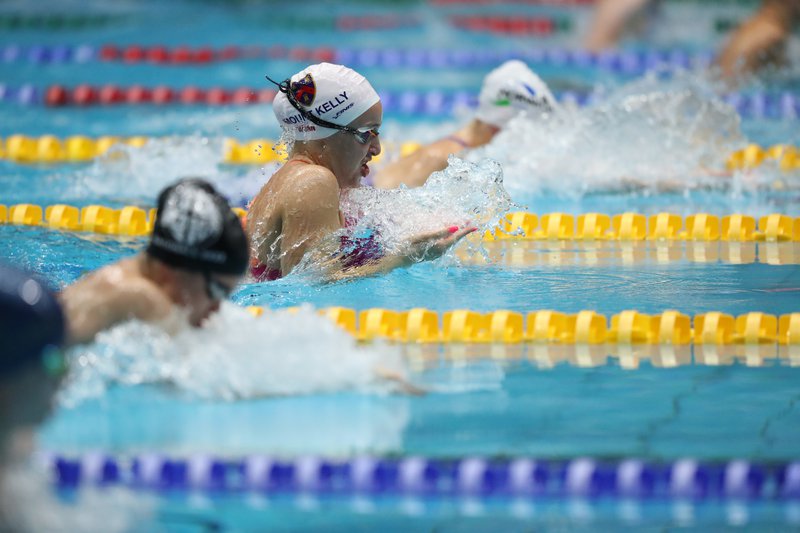 Camden Swiss’ Leah O’Connell was the sole entrant for the Women’s MC 50m Butterfly final, with the S7 athlete providing a solid swim as the crowd raised the roof with support. She managed to beat her time by over half a second; continuing the trend of successive time reductions.

The Men’s edition of the preceding event provided three athletes who were all vying for glory. All competing in the S6 category, it was Devonport’s Xander Harris who held a body length lead from the first half of the race to take home what was an impressive win, ahead of a narrow finish between Mount Kelly’s Sebastian Williams and Northampton’s Bruce Dee.

The final races of the evening came from the Men’s 50m Breaststroke. An almost perfect line of swimmers in the 13/14 age group final provided a lottery for the win, as Max Morgan of Wandsworth did brilliantly to get his hands on the wall first. It was City of Peterborough’s Joshua Sackree who missed out by five hundredths of a second into the silver, with City of Leeds’ Daniel Ransom receiving bronze.

Dominant performances in the subsequent races from Tigers Jersey’s Filip Nowacki, Nova Centurion’s Callum Melville and Millfield’s Elliot Woodburn provided the entertainment for the next set of age groups.

The 18 year-old final provided a dramatic spectacle for fans in the Ponds Forge arena, as the entire field were separated by less than a second, with both Dartmoor’s Cameron Williams and Skipton’s Rohan Smith sharing the gold medal after a dramatic finish which could’ve gone anywhere. Orion’s Karnell Nunes-Smith sneaked in for the bronze, with all but one of the athletes going under the 30 second barrier.

The final race of the evening suited the trend of the event well, with Putteridge’s Lawrence Palmer edging out the Loughborough duo of Oliver Taverner and Alex Cohoon, who both shared the silver medal.