Great Britain top the European Swimming Championships medal table with one day to go, as the team won a further five medals on Saturday night.

Peaty led the charge, as he has done with this current generation of British swimmers which is surpassing all expectations here in the Hungarian capital, as the medal tally ticks into double figures, nine of those gold.

Lining up in his favoured lane four in the Men’s 50m Breaststroke final, Peaty absorbed the pressure of being the all-conquering favourite to forge clear of the field and win by half a body length. He was pushed in the opening seconds, but truth be told, there was only ever going to be one winner.

“It was almost perfect execution there. It’s looking very promising if I can do that in a 50m with where I’m at right now. I really just wanted that win and that’s what it’s all about – finding a win when you can’t get your best - it was just about getting my hand on the wall first. It’s a great feeling and I’m born to race.”

The National Anthem would be belted out around the Duna Arena once more as Great Britain’s Mixed 4x100m Freestyle Relay team won a thrilling finale to Saturday’s swimming action. With three relay golds already in the bag, alongside a brace of silvers, Britain is building quite a reputation as a relay powerhouse, a top-drawer quartet of Duncan Scott, Tom Dean, Anna Hopkin and Freya Anderson getting the job done, equalling the Championship Record in the process. 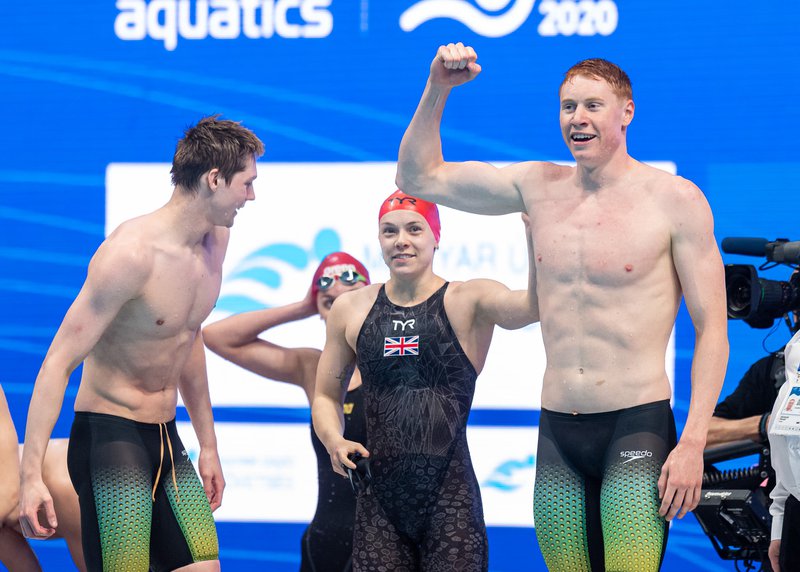 After medals in the 200m Freestyle last night, Scott and Dean set the team up beautifully, leaving their female counterparts to bring it home. Hopkin, fresh from a trip an individual trip to the podium, hunted down the Italians, before Anderson swam another superb anchor leg, taking the lead and holding off the Dutch, who pushed her all the way to the line.

Off her anchor leg, Anderson said:

“What was going through my head was just to keep building on the success the relays have had. I think all the relays with girls in have won gold, so I didn’t want to let that statistic down!”

“We just had to do our part and then the ladies in the back half of our relay are some of the best in the world. If we do our job correctly, it puts us in a really good position. I think we did that and then Freya hunted some people down like usual.

“It was great to be part of that relay, it's my first gold of the meet so I'm really happy with that.”

The Women’s 200m Individual Medley final proved to be a brilliant spectacle, Abbie Wood delivering when it mattered most. The Dave Hemmings-coached swimmer has been on fine form all week, and she continued that with a well-rounded performance to land her first individual medal on this stage.

Leading at the end of the butterfly leg, Wood looked at home at this level, slipping back slightly on the backstroke before blasting her favoured breaststroke leg to lead off the final turn. From then on it was all about holding both her nerve and her form, which she did like a pro to strike silver, just 0.04 shy of gold.

“Racing in a senior final is completely different to anything I’ve done before and that’s my first individual senior medal. Just to be to do that and produce a good time on an international stage is all I’ve wanted, especially when we’re not as rested as we could be – I couldn’t have asked for much more,” she said.

“Kicking off the week with three relay swims, which I didn’t really expect because I’m not a freestyler – but I guess now I am – to then focus on the individuals has been a hard turnaround. But with this back-to-back swimming, it will make Tokyo seem so easy when I’ve only got one swim per session – to double up last night is probably the biggest learning experience I could have got.” 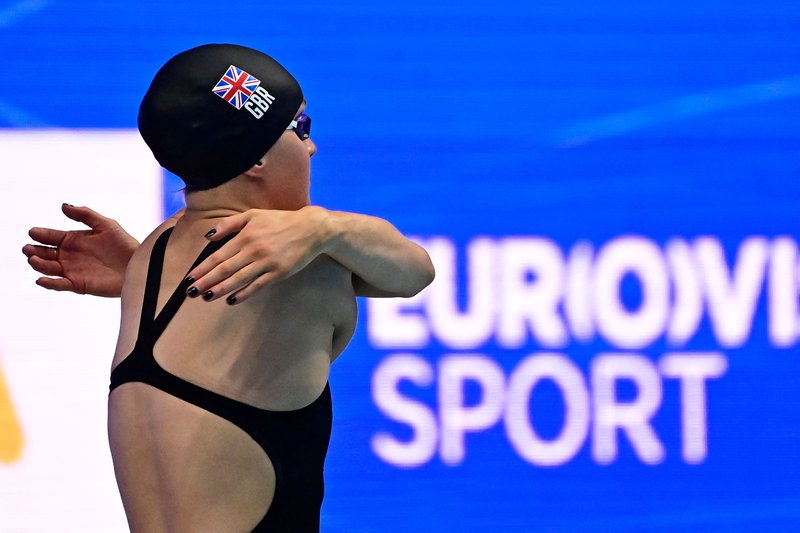 There was also European silver for Greenbank, another impressive swim backing up his two British record-breaking swims the previous day. Taking the race to his rivals, Greenbank led at halfway, forcing those around him to chase. Showing grit down the final 50m as he started to tire, the National Centre Loughborough man struck Men’s 200m Backstroke silver and almost broke the national record for a third time.

Reflecting on a race where he was just 0.17 seconds short of lifting the title, Greenbank said:

Starting the barrage of medals on this stunning Saturday night was a brilliant bronze for Hopkin in the Women’s 100m Freestyle final, the talented freestyler taking her European medal tally to three, having already won gold in the Women’s 4x100m Freestyle and Mixed 4x100m Medley relays – this would become four before the night was out.

The National Centre Loughborough swimmer, who like Peaty and Greenbank is coached by Mel Marshall, used her front-end speed to great effect as she led at the turn, but crucially kept her cool when those around her applied the pressure, a season’s best when it matters bringing her first individual medal at this level.

Delighted with her efforts, Hopkin said:

“I’m so happy. I had in the back of my mind that a medal could be possible, but I didn’t want to think about it too much. I saw the time first, and I was really happy with that as it’s faster than I did at trials and then I saw the place! This week has been a real confidence boost and I think I’ve built nicely through the week too. After doing such good splits in the relays, I really wanted to do the same in the individual and do myself justice, so I’m glad I managed to do that.”

Also enjoying a busy but fruitful week, Freya Anderson was just 0.13 seconds off the podium in fifth, courtesy of another quality swim.

James Guy hinted that he is back to his very best, the former world champion dominating his 100m Butterfly semi-final to secure a centre lane as one of just two swimmers to go inside 51 seconds. The David McNulty-coached swimmer has enjoyed a brilliant week in the relays and has carried that momentum into his individual event, the podium now in his sights tomorrow.

Ben Proud enjoyed a good old scrap in the Men’s 50m Freestyle semi-finals, the National Centre Bath man stamping his ticket into the final after touching third – that final is shaping up to be the closest contest of the week.

Cassie Wild continued her fantastic form here in Budapest by booking her spot in the Women’s 200m Backstroke final, and she’ll be joined by youngster Katie Shanahan who backed up this morning’s personal best swim to progress.

Wild admitted this morning that she was tired after a heavy schedule this week, but she showed her quality this evening with a superb lifetime best swim that saw her through fourth fastest. For Shanahan, it was a surprise ticket into the final on her senior debut, the Danielle Brayson-coached swimmer left speechless.

The Women’s 50m Breaststroke semi-finals saw Sarah Vasey back in action, having made the 100m equivalent earlier in the week – it was the same story this time around, the Mel Marshall-coached swimmer going within a whisker of her personal best to take the win and book a lane for tomorrow night.

Harriet Jones was in semi-final action, the Cardiff swimmer getting a swim in the last 16 after initially thinking she’d missed out. She made the most of the opportunity, going just over a tenth quicker than she did this morning.